With Less Than a Week Until Election Day, National Cannabis Business Trade Journal mg Magazine Reveals How the "King of Los Angeles" Virgil Grant Plans to Fix the Industry 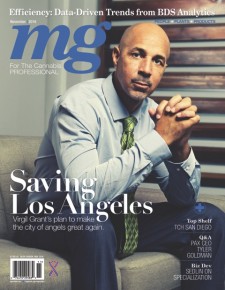 In playing a pivotal role in successfully bringing the city and the industry together to finally fix the cannabis industry in Los Angeles, the 49-year-old Compton native has been able to do what no one before him could accomplish. "I didn't ask [the City Council] to do something, I demanded that every one of them get off their butt and do this the right way. We have to make sure the number-one market in the world is fixed, because it's broken and the world is watching," says Grant in the exclusive and timely interview. With Los Angeles and the industry in ongoing negotiations, this is a story unfolding in real-time!

"I didn't ask [the City Council] to do something, I demanded that every one of them get off their butt and do this the right way. We have to make sure the number-one market in the world is fixed, because it's broken and the world is watching."

As a founding member of the Southern California Coalition and a co-founder of the California Minority Alliance, Grant has been a longstanding and respected member of the Los Angeles cannabis community since the beginning. After becoming a victim of the war on drugs, sentenced to six years in prison for cannabis-related charges - despite operating licensed and legal collectives in several Southern California cities - Grant returned last year determined to bring together the industry and the city he loves to ensure that it is properly and fairly represented and regulated for many years to come.

MORE Pot and Politics. mg magazine's http://mgretailer.com/ October cover story "Cannabis on the Ballot" summed up everything businessmen, businesswomen, doctors, patients, caretakers, moms, dads, kids and voters need to know about the nine states with cannabis measures on the ballot this November. Arizona, California, Maine, Massachusetts and Nevada are considering adult use ballot measures, while Arkansas, Florida, Montana and North Dakota are voting on medical marijuana. As with all cannabis-related initiatives, each one varies tremendously in the fine print, and mg magazine breaks it all down in the “Cannabis on the Ballot” October feature.

Never have pot and politics been so strongly intertwined as in the upcoming election. On the "for" side is the usual cast of characters - medical and recreational marijuana advocates, prison sentence reformers and Sean Parker, who has contributed over $6M in support of California's Proposition 64 - but with increased support at historically high levels. On the "against" side are some strange bedfellows, like law enforcement groups and smaller growers, though for different reasons.

In addition to the ballot measures in the nine states, there are many more ballot measures at the municipal level that are just as important as those at the state level. Because of the local nature of cannabis legalization and regulation, it is essential that members of the industry and the public also inform themselves about what is happening where they live, and to participate whenever possible. The future of cannabis will be determined by those who step up to help define it.

Interesting races to watch: The 800-pound green gorilla in the room of course is California's Proposition 64, with over $18M in contributions (almost one-third from Napster founder and former Facebook president Sean Parker alone) and support averaging around 60 percent since the beginning of August. Should Prop 64 pass as predicted, it has been estimated that the total market for legal cannabis in California could grow from $2.7B to $6.6B by 2020.

Arkansas is voting on two medical marijuana measures. One dictates that the state's Alcoholic Beverage Control establish operating rules for dispensaries and cultivators and prohibits patients from growing marijuana at home. The other does not. If Issue 6 and Issue 7 each receive majority approval, the one with the most “yes” votes will supersede the other.

In Maine, where medical marijuana is currently legal, Question 1 (if passed) legalizing recreational use, would regulate and tax marijuana as an agricultural product. It would allow individuals over the age of 21 to possess and use marijuana and provide for the licensure of retail facilities AND marijuana social clubs.

Read the October Pot and Politics story online here: http://mgretailer.com/cannabis-vote-ballot-2016/
mg’s October issue can be found at Barnes & Noble retailers, or by calling (310) 421-1860.

mg is the leading national trade media organization for the legal cannabis retail market. Available both in print and digitally, mg places a singular focus on the people, plants and products that fuel the unprecedented growth of the burgeoning cannabis industry at the retail level. mg is the retail division of CANN Media Group, LLC which also operates in four other vertical sectors of the cannabis industry including hemp manufacturing, medicinal use, processing, and education.

mg Magazine is a leading business-to-business monthly publication that places a singular focus on the people, plants and products that fuel the unprecedented growth of the legal retail cannabis industry, often referred to as the "Forbes" of cannabis.