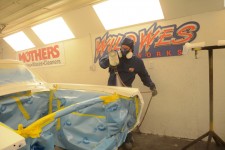 By using an Axalta product that is targeted for the value segment, Wild Wes Paintworks and Hot Rod Factory in Dover, OH, are gathering accolades and winning major awards for their work.

Owned and operated by Wes Adkins, 47, and his wife, Stephanie, their two businesses are getting national exposure for both quality and creativity—and he credits much of that to his paint.

Adkins established Wild Wes Paintworks in 1994, right after he earned a degree in visual communications. Earlier this year, he opened the doors at the Hot Rod Factory, where his goal is to perform half a dozen complete builds annually. With four employees that work at both facilities, Adkins likes to say that his companies are small but focused intently on high-end paint and turnkey builds.

“Both of our shops are fairly small (2,500 square feet each), and we don’t do any conventional collision repair work except for occasional small jobs,” he said. “If an existing client needs something fixed, such as a minor dent or some scratches, we are happy to do it, but we’re more about creating things rather than repairing them. Over the years, we have slowly weeded out all of the lower-end projects, so if we can’t put our name on it and be proud of it, we don’t want to do it.”

Five years ago, Adkins was unhappy with his former paint company. He began looking around for something better and found Metalux, which is now marketed as a value brand by Axalta, he said.

“Our customers are expecting perfection, so we need a product that will perform at a high level on a consistent basis to exceed their expectations,” he said. “When we first started using the Metalux, we could immediately see that it was an ideal match for us. Almost every project we work on is part of a promotional, cross-marketing campaign with large companies in many cases, so we have to make sure the finished product is spectacular.”

Some of Wild Wes’ more notable accomplishments include work he has done for Toby Keith, the country singer, and well-known organizations.

“We custom-painted a truck for Toby and over 150 guitars for him through Ford Motor Company promotions, and that gained us a lot of national exposure,” Adkins said. “We’ve won multiple Best in Show and Best Paint awards at different shows, and this year we will display our 21st SEMA vehicle build in Las Vegas while representing Axalta and Metalux.”

In 2013, Adkins began using Metalux and immediately became a strong believer and supporter of the brand.

“We were impressed by the coverage and how it sprays out so nicely,” he said. “The wet sanding and buffing is easy, and we’re saving 30–40 percent when compared to our former paint. The quality is as good or better, so we’re obviously pleased and happy [with] where we’re at with Metalux.”

When it comes to pleasing his customers with unique colors or some classic favorites, Metalux excels at dead-on color matches and new one-of-a-kind formulations, Adkins said.

“I work with their quality engineer, Andy Zuercher, to put together colors for us that are on the money, and they’re exactly what we need for every project,” Adkins said. “We reach out to their color lab, and they always come through for us, even when we’re looking to develop a unique color that does not exist. We have created several one-of-a-kind colors for customers, and that’s a real benefit of working with Andy.”

“Our technical consultant, Doug Markovich, is exceptional,” he said. “He comes by every few months, and each time he imparts some information that assists us to do a better job. He looks at how we’re using the product, and his advice is always on the money. If we ever have any questions, Doug is always available and willing to help.

“We need color clarity, especially with these high-end projects. We never get any spotting or mottling with this product, and the application process is easy. An amateur could even get a little careless with it when they put it on and still get a great result every time and look like a pro because the Metalux is so forgiving.” Having the ability to make the Metalux work for them on the fly is a big plus.

“It comes out of the gun and lays down really nice, but we perfect it even more after that,” Adkins said. “Their clear coat provides us with a lot of depth and reflectivity. We wet-sand it and finish with 2,000 grit and polish from there. We compound with a wool pad and finish with a foam pad and polish that is outstanding, and we’ve had some great success with that.” 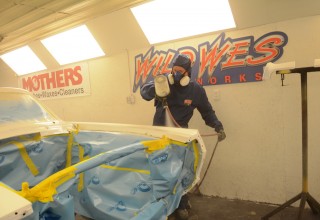 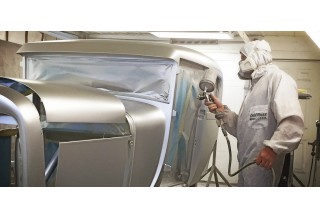 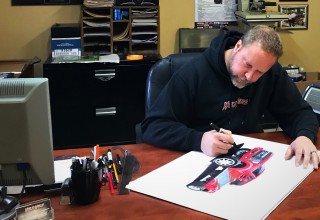