Who is Buried in Famous Tall Betsy's Tomb?

"To Fort Hill Cemetery she will go, to her mausoleum, with YOU in tow!" 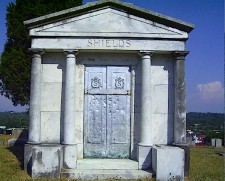 In the early 1900’s, Tall Betsy was a real person who happened to be very tall and walked the Cleveland streets at night. Speculation about the resident’s identity varied. Some suspected she was a police officer who dressed in black to scare people off the streets. Others believed she was a tall woman garbed in black who roamed the streets only at night to avoid being gawked at because of her odd appearance.

I fought to make Tall Betsy the official spook, and I promised to make her costume and dress up like her if she won the title.

Whatever her true identity, she was the perfect fodder for legend. Cleveland parents in the 1920’s and 1930’s told their children that if they failed to come home before dark, they would likely encounter Tall Betsy, sometimes called Black Betsy or simply The Lady in Black.

Hearing this story from his mother and grandmother as a child, businessman Allan Jones became enamored with the tale. He dreamed of dressing up as the legendary lady, and made his first attempt in 1970 as a high school sophomore. In preparation, he dyed one of his mother’s white sheets black with Ritz dye. He mixed the dye in a horse bucket out by their barn and started a fire under the bucket. He also cut down two saplings to use as stilts. Unfortunately, the stilts bowed while drying, causing Jones to appear less gruesome girlie and more bowlegged cowboy.

Though his initial attempt failed, Jones clung to his goal of donning Betsy’s clothes and keeping her legend alive. Ten years later, his dream came to fruition.

“Cleveland’s Central City Action Association, which later became MainStreet-Cleveland, wanted to establish an official downtown spook,” Jones said. “I fought to make Tall Betsy the official spook, and I promised to make her costume and dress up like her if she won the title.”

Thanks to Jones’ insistence, Tall Betsy won out as the official spook of Cleveland. With Tall Betsy poised for local — and later, national — celebrity, Jones suddenly had to flesh out her backstory and he made it up off the cuff during an interview with the Cleveland Daily Banner.

Like the rest of the legend, the location of Betsy’s permanent quarters came from this interview. The reporter asked where Tall Betsy resided, and Jones gave the first answer that popped into his head. He said the Lady in Black lives in a mausoleum at the highest point of Fort Hill Cemetery, where Jones became a legend in his own right.

“Around 1969 my friends and I, who were all around 16 at the time, heard about a mausoleum in Fort Hill that had been vandalized,” said Jones. “The result of the vandalism was that curious kids could look in and see the exposed casket.”

Jones and his friends visited the cemetery that summer and noticed that the back window bars of the mausoleum had been removed, and the inside had been vandalized.

“About 25 percent of the marble was lying in the floor, allowing me to look in at an old casket on the shelf,” Jones revealed. “There were nearly 18-inches between the side and the casket, and a friend dared me to crawl in and lay next to the casket. Then he double-dog dared me. So I crawled in quickly. We all ran back to the car, but my bravery became legendary.”

When Jones glanced back, he saw it was the tomb of Flora Shields (also listed on census records as Emma F. Shields). The name became etched in his mind forever.

Eleven years after reading Flora Shields’ name, Jones donned the Tall Betsy outfit for her first Halloween outing at Johnston Park from 3 to 5 p.m. Afterward, she laid in the back of a pick-up truck driven by Jones’ childhood friend, Lou Patton. Tall Betsy then made an encore appearance at Jones’ Centenary home. There, Jones’ mother and then-girlfriend Janie Pangle were throwing a Halloween party for Jones’ daughter, Courtney, of whom Jones was a single parent.

The children were enraptured with Tall Betsy, as were a handful of trick-or-treaters who came to Jones’ house that night. Exhausted, Jones relaxed that evening, counting it a one-time success. He’d succeeded in dressing up as his beloved childhood spook and made sure everyone in Cleveland knew of her legend.

Jones figured his Tall Betsy costume would hang in his closet untouched for years to come, but other people had different plans.

“Lou Patton’s sister, Janie, called me before Halloween of 1981 and asked if I would dress up as Tally Betsy again,” Jones said. “If it weren’t for that call, I may have never donned Betsy’s outfit a second time.”

According to Jones, 1981, his second outing as Tall Betsy, is when the legend really took hold of Cleveland’s imagination. From popular demand, Jones went on to make appearances as Tall Betsy year after year in front of his then-house at 150 Centenary Avenue NW, the gruesome girlie gaining more notoriety each time. Eventually, Tall Betsy became so popular that people flocked to Cleveland on Halloween just to sneak a peak. In 1998, the Jones family official count was that 11,201 trick-or-treaters came to their Centenary door, each receiving a single piece of bubblegum.

As Tall Betsy’s popularity soared, Jones reflected on the legend he created. He spent a lot of time through the years wondering about Flora Shields, the lady who was buried where Jones claimed Tall Betsy lived.

“After the legend of Tall Betsy grew to the point where people were traveling from across the South to see her on Halloween, I started trying to figure out who Flora Shields was and why no one knew anything about her,” Jones said.

Eventually, Jones hired Michael Slaughter — one of the nation’s most respected genealogical researchers — to uncover who built the mausoleum and when. Jones also tasked Slaughter with finding out who’s interred there, and when and where they lived. He wanted to know who Flora Shields was, and why none of her family members complained that her grave had been transformed into Tall Betsy’s home.

Slaughter’s research revealed that Ms. Shields was born in August 1866 and died in 1951. She never married, never worked and never crunched any child’s bones. And though interred here, she spent only a handful of years in Cleveland.

Nearly 70 years after her death, Ms. Shields has no surviving family members. Hence why no one complains about Tall Betsy taking up residence in her tomb.

“Flora was 85 years old when she died in Miami,” said Slaughter. “She was essentially an old maid who never worked nor married, whose source of income was her wealthy grandfather, William Shields, who reported a significant net worth of $20,000 in 1860.”

For comparison, the richest person listed in Cleveland’s 1850 census was Thomas Callaway, whose net worth was $27,000. So Flora’s grandfather, the first of the Shields family to move to Bradley County, was one of the wealthiest people in Polk County at the time.

Slaughter noted that although Flora’s name will be forever linked to the famous Tall Betsy of Centenary Avenue, she only lived in Cleveland between 1866 and 1870. It was during this time that Ms. Shields’ father, John Caswell Shields, owned a grocery store across the courthouse on Ocoee Street. Mr. Shields went on to practice medicine for decades prior to his early 20th-century return to Bradley County, Tennessee.

Born in Murray County, Georgia, Ms. Shields was in Smith County, Texas, with her family for the 1870 census. A decade later, she, her four siblings and her mother, Emily Howell Shields, were in Murray County, Georgia, while her father, John Caswell Shields, was in Eugene, Oregon. The family later reunited in Umatilla County, Oregon, returned to Bradley County in the early 1900’s, and moved to Miami, Florida, following John Caswell’s death. Flora lived in Miami with her mother, niece Esther and Esther’s husband, Mr. Dupont (the first name is unreadable in the census). Following her mother’s death in 1924 in Dade County, Florida, Flora began living with her niece Lena B. Donovan, and by 1940 lived by herself in Homestead, Florida.

In conclusion, Slaughter reported that Ms. Shields passed away on September 27, 1951, in Dade County, Florida. He further stated that the Shields mausoleum was likely built between 1900 and 1908, with Flora and her parents, John Caswell Shields — who died in Bradley County on November 12, 1908 — and Emily Howell — who died in 1924, its only occupants. 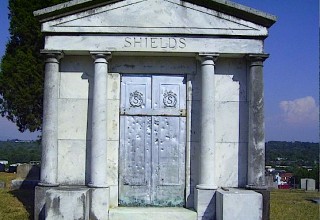 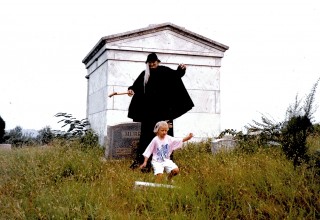 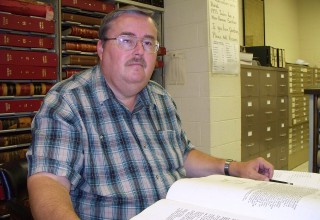