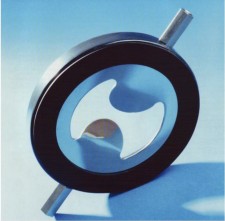 Westfall’s high-performance plate mixer Model 2800, originally developed for the municipal water treatment industry, has recently been put to the test in other industries, on both land and sea.

Most static mixers have a limited range because of their conventional design. The unconventional cloverleaf baffle and vane designs incorporated in Westfall's mixers give them versatility and effectiveness for a wide range of applications and customer satisfaction.

One company that recycles water at hydraulic fracturing sites (promising low cost) applies Westfall’s plate mixer to a process that adds polymer neat to recycled water. He runs the risk that suspended solids won’t be fully flocculated, but the mixer’ high performance eliminates that risk, as well as the need for coagulants.

Another company uses Westfall’s plate mixer to make liquid drill mud for oil rigs at sea. Dense mud is barged to the drill site where it is pumped through the static mixer along with salt water to reach the desired viscosity for lubricating downhole drilling.

An innovative New England start-up is using the same compact plate mixer to batch mix a gel-based foam that becomes an impermeable weatherproof coating for insulated fabrics and pipe wrappings.

In Turkmenistan, a series of plate mixers are installed in a reverse osmosis plant to pretreat RO membranes. The high efficiency and short lay length of these mixers make them ideal for the rapid chlorination, coagulation, anti-scalant and oxidant scavenger dosing needed to extend the life of RO systems.

By installing the injection nozzle one-half diameter downstream of the mixing plate, municipal water treatment facilities can add caustics to raw water without the risk of scale build-up or plugged mixers. The high shear turbulence generated by the mixer’s cloverleaf-shaped baffles keeps the chemicals and water moving in counter-rotating vortices for complete mixing within 10 pipe diameters.

Westfall’s new Low Headloss Vane Mixer 3050 is put to use as a gentle blender for liquids and gases. It is installed in the underground pipeline that brings natural gas to New England from Canada.

It is installed in a Midwestern state at the bottom of a manhole, replacing a clogged pipeline mixer for a local municipality. The mixing vanes are repositioned to the downstream pipe end, allowing injection ports to be placed in the center of the pipe for access and dosage management.

Similar mixing vanes are included in Westfall’s Flow Conditioner 3000, specified by the largest municipal water treatment facility in the Southwest because it is more effective than the traditional 19-pipe bundle. With the conditioner’s ability to remove turbulence and swirl, and generate a +/- .05% fully developed velocity profile, municipalities know their meter readings are accurate and customers know they are getting all the potable water they pay for.

Westfall Manufacturing is a small company in a small state that designs and delivers smart motionless mixers for pipeline installations around the world. They specialize in oversize static mixers that cause 2 - 4 times less headloss than competitors.