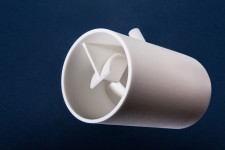 Until now, rapid mixing required an impeller blade and an engine with an electrical power source. Now complete mixing within three pipe diameters (to a CoV of 0.025) is available in our new Model 6000, a Counter-Swirl Static Mixer that has minimal headloss.

With an industry-leading CoV of 0.025 at 3 pipe diameters and a low headloss K-value of 1.26, Counter-Swirl Static Mixer 6000 is effective in large pipe sizes up to 120 inches as well as in operations that require pipes as small as .75 inches in diameter.

Westfall’s new concept Static Mixer features up to 3 injection ports aligned on a single side, and three curved fins attached to the inside of a pipe. The key to the mixer’s effectiveness lies both in the fin shape and in the fin placement. By moving the two side fins upstream of the center fin, the additive chemicals enter a zone of counter-rotating turbulence that promotes excellent mixing.

The side fins can be placed one to three inches upstream of the center fin according to the customer’s mixing requirements.

All standard manufacturing materials and processes are available for this mixer, including 3D printing.

Westfall Manufacturing is the designer and manufacturer of a range of high-performance Wafer and Pipeline Static Mixers. The company holds 6 active patents; the patent is pending for the Counter-Swirl Model 6000. For more information contact Westfall at 888-928-3747 or 401-253-3799. 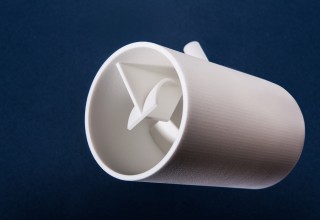 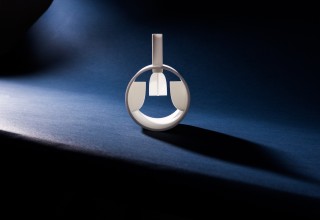 Westfall Manufacturing is a small company in a small state that designs and delivers smart motionless mixers for pipeline installations around the world. They specialize in oversize static mixers that cause 2 - 4 times less headloss than competitors.