Were Louisiana's Ancient Mounds Designed to Send Souls to the Stars?

Placement of several thousand-year-old mound complexes in Louisiana were arranged to align with the constellations of Cygnus and Orion. 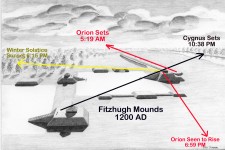 Marksville, Louisiana, June 2, 2016 (Newswire.com) - ​The oldest known Native American mounds in Louisiana date to nearly 5700 years ago and were constructed at the beginning of America’s ancient mound builder culture. Mounds were made to bury the dead, create elevated platforms for the domiciles of the political and religious leaders, and to make sacred spaces for social and religious ceremonies.

One of the most closely-guarded secrets of this enigmatic culture was the so-called death journey. It was a ritual performed at the time of the Winter Solstice sunset, and involved a method for the souls of the deceased to go to the sky world where they could join with their ancestors who made the same journey long ago. The exact arrangement of particular mounds within complexes containing multiple mounds has long been a mystery to archaeologists. However, recent research has shown that many mounds were used to make sightings of the rising and setting of stars in the constellations of Cygnus and Orion on the Winter Solstice, generally on December 21. Mounds were deliberately constructed in specific spots to allow for this death journey ritual that was performed on the shortest day of the year.

Computerized analysis of all three sites showed alignments to the Winter Solstice sunset, the setting of Cygnus, and both the rising and setting of Orion's Nebula on the same night. At the Fitzhugh site, the long 2700-foot walkway appears to be a pathway to Messier-42.

On the night of the Winter Solstice several key alignments to the horizon were made. The first targeted the setting of the sun. This was typically done from the tallest mound across a somewhat smaller mound—one that usually had a temple on its top. The setting of the brightest star of Cygnus (Deneb) was also targeted by viewing its setting point on the horizon from one mound across the top of another mound within the same complex. The rising and setting points of Orion’s Nebula (Messier-42) was also sighted across mounds. The death journey concept is known as the Path of Souls. It involved the soul leaping to Orion’s Nebula just before it set beneath the horizon early in the morning. The soul then transitioned to the Milky Way where it journeyed to the North to Cygnus and Deneb, where it moved through a portal leading out of the sky dome.

Previous research by Dr. Greg Little, author of the Encyclopedia of Native American Mounds & Earthworks, has shown such alignments in Mississippi and several other sites in Ohio and Indiana. Utilizing the precise GPS coordinates of individual mounds at the large Greenhouse, Jordan, and Fitzhugh mound complexes in Louisiana, the sunset and movements of Orion and Cygnus were calculated for each site with computerized Starry Night Pro software.

The Greenhouse site dates to about AD 600 and is a Troyville-Coles Creek Culture site near Marksville. It had 7 platform mounds (truncated pyramids) around a central plaza area. The Jordan site dates to approximately AD 1540 and also had 7 mounds arranged around a central plaza area and a long, C-shaped earthwork. Fitzhugh Mounds, which dates to AD 1200, also had 7 platform mounds and several long, elevated flat walkways connecting mounds. At the extreme north end of the site, a 2700-foot-long, 75-foot-wide, elevated terrace ran to the west. Computerized analysis of all three sites showed alignments to the Winter Solstice sunset, the setting of Cygnus, and both the rising and setting of Orion’s Nebula on the same night. At the Fitzhugh site, the long 2700-foot walkway appears to be a pathway to Messier-42.

For more information see the full article at AP Magazine.