Authors Ask: Did Our Human Ancestors Gain Their Earliest Technological Advances from Denisovans with Savant Skills? 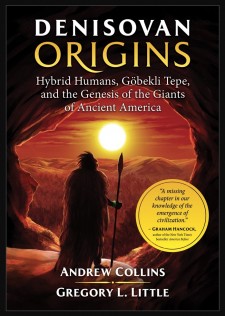 ROCHESTER, Vt., September 10, 2019 (Newswire.com) - ​​​According to an ATA-ISR interview, some of humanity’s earliest advances in stone tools to clothing originated with the mysterious Denisovans, who perhaps possessed unique savant skills. The claim, made in a newly released book,  demonstrates how two genes (ADSL and CNTNAP2) linked to autism in modern humans were possessed by the mysterious human group known as the Denisovans, who thrived in Siberia and eastern Eurasia down to around 45,000 years ago.

Individuals with autism spectrum disorder (ASD) often possess unique talents, including the ability to quickly process data. These "savant skills," seen today in sufferers of ASD, might also have allowed the Denisovans to pull ahead of the Neanderthals, who did not possess the same genes.

The book’s authors, science and history writers Andrew Collins and Gregory Little, show how a highly specialist type of stone tool manufacture known as microblade technology, along with the creation of a stone bracelet and the earliest known bone needles probably used to make tailored clothing, began with the Denisovans long ago.

“All this took place in the Denisovans’ suspected homeland of Siberia and Mongolia. The sequencing of the Siberian Denisovan genome revealed the presence of genes linked with autism and it is likely that they possessed quite different mindsets to those of Neanderthals and anatomical modern humans,” Collins points out. “The spread of microblade technology probably began in the area of southern Siberia and northern Mongolia, right where the Denisovans are thought to have lived.”

In 2010-2012, DNA from a finger bone found in the Denisova Cave by the Max Planck Institute for Evolutionary Anthropology revealed that it belonged to a previously unknown type of archaic human, afterwards dubbed "Denisovan" in honor of its place of discovery. It was this Siberian Denisovan genome that was found to contain two genes - ADSL and CNTNAP2 - linked with modern autism.

“Whether or not these two genes were passed on to modern humans by the Denisovans is not clear,” Collins emphasizes. “However, these genes would pass on to their hybrid descendants, and may well have affected them in quite different ways. How exactly is speculation. Hybrid descendants of the Denisovans carried these advanced stone tool technologies and other skills into areas of the Eurasian continent,” Collins adds.

“We know that the Denisovans also interbred with the Neanderthals and eventually with us,” he says, “so it is likely that their descendants were an admixture of three types of human — Denisovans, Neanderthals, and modern humans. All this came about, we think, because the Denisovans possessed a unique combination of genes that allowed them to make advances and become the progenitors of modern human civilization.”

Denisovan Origins: Hybrid Humans, Göbekli Tepe and the Genesis of the Giants of Ancient America was released Sept. 3 by Inner Traditions.