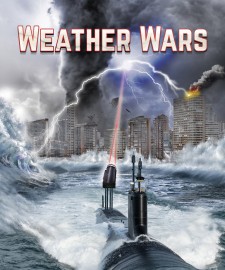 The story is based on Rob Simone's internationally successful show on Coast to Coast Radio about climate engineering, also referred to as geoengineering. Rob explores military advances in weather modification. He examines the complex subject matter on his show.

"We set the story in the future, where proliferating nuclear arsenals guarantee nothing but mutually assured destruction, so militaries have turned to using the weather as a weapon."

Wilgington suggested that hurricanes, typhoons, earthquakes and other disasters these days are anything but natural, or just random bad luck. Instead, "he maintains that governments may be using artificially generated weather disasters to force a humanitarian relief response so they can use it as cover to gain a foothold in other countries."

Some conspiracy theorists believe the ability to modify weather patterns at will are already well on its way to reality.  They claim the Chinese government changed the weather during the Beijing Olympics to ensure the games would proceed smoothly. There is a longtime United Nations treaty that prohibits the use of weather warfare.

"Rob pitched me the idea and then said the title, 'Weather Wars,' and I was sold," said Orbach.

Orbach and Simone teamed up to create a Hollywood action-adventure that capitalizes on current conspiracy theories.  They advance the military's ability to use weather during warfare and create a terrifying reality.

"We set the story in the future, where proliferating nuclear arsenals guarantee nothing but mutually assured destruction, so militaries have turned to using the weather as a weapon," Orbach said.

Their story explores scenarios of what would happen if the military could use a tsunami or underwater earthquake as a tool for warfare. The film's themes focus on the Butterfly Effect: how tampering with the climate could potentially change the world's weather patterns and set the stage for world destruction.

The story pits two scientists with very different world-views against each other. One is a humanitarian who sees weather modification as a tool to eradicate famine and promote peace and stability. The other uses the technology to dominate the world.

The film is intended for release in a 3D format, with epic action scenes such as a "superquake" erupting across multiple fault lines and an underwater volcano that sucks a fleet of ships to the bottom of the ocean.

Orbach, who wrote the screenplay, stated, "We wanted a 'real feel' to the story, something that would grip the audience authentically and entertain them at the same time," he said, "'Weather Wars' will be the first action-adventure that truly explores an all-out weather war and the ramifications of weather modification."