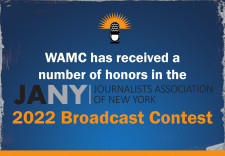 ALBANY, N.Y., August 19, 2022 (Newswire.com) - WAMC has received a number of honors in the Journalists Association of New York 2022 Broadcast Contest. Awards will be distributed at an Oct. 15 ceremony when first-place winners are announced.

WAMC's North Country Bureau Chief Pat Bradley, who is based in Plattsburgh and has covered Vermont, the Adirondacks, and neighboring Canada since 1996, is a finalist for the Art Athens General Excellence of Individual Reporting award.

"We are so grateful to the Journalists Association of New York for recognizing WAMC's important and dedicated work during such a challenging period," WAMC President and CEO Dr. Alan Chartock said. "We are also deeply indebted to our members and listeners who keep the station going."

In May, WAMC received a Regional Edward R. Murrow Award in the category News Documentary for its Oral History of the Capitol Siege.

Among the most prestigious awards in news, the Murrow Awards recognize local and national news stories that uphold the RTDNA Code of Ethics, demonstrate technical expertise and exemplify the importance and impact of journalism as a service to the community. Murrow Award-winning work demonstrates the excellence that Edward R. Murrow made a standard for the broadcast news profession.

"A New York Minute In History" focuses on the history of New York and the unique tales of New Yorkers. It is hosted by State Historian Devin Lander and Saratoga County Historian Lauren Roberts. Jesse King and Jim Levulis of WAMC produce the podcast. "A New York Minute In History" is a production of the New York State Museum, WAMC Northeast Public Radio and Archivist Media. Support for the project comes from The William G. Pomeroy Foundation. Original funding came from the National Endowment for the Humanities and a Humanities New York Action Grant.

WAMC/Northeast Public Radio is a non-commercial, public radio station and nonprofit organization that presents award-winning news and cultural programming 24 hours a day, 7 days a week. WAMC's listening area reaches parts of seven states, including New York, New Jersey, Pennsylvania, Vermont, Massachusetts, Connecticut, and New Hampshire; as well as parts of Canada. With over 400,000 monthly listeners, WAMC ranks among the most-listened-to public radio stations in the United States. WAMC is a member of National Public Radio and an affiliate of Public Radio International. For more information on WAMC, please visit www.wamc.org or call 518.465.5233.

WAMC Has Received a Number of First- and Second-Place Honors in the Journalists Association of New York 2022 Broadcast Contest
Awards were distributed at an Oct. 15 ceremony in Saratoga Springs.
WAMC Northeast Public Radio - Oct 20, 2022