Sustainable Realities: Hacking the Future in VR, AR & 360 at the Public VR Lab 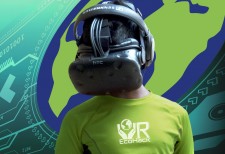 The VR EcoHack offers a free, community-based, participatory media weekend for creatives, coders, educators, students and activists to come together to produce virtual reality content that highlights key sustainability issues locally and around the world in VR, AR and 360 video. The weekend will kick off at 5:30pm on Friday, April 21st with a free public expo of VR, AR and 360 demos, climate change speakers, followed by hackers starting their engines soon after 7pm.

To promote this event, co-founder of the Public VR Lab, Kathy Bisbee, and her team created a parody video of the classic Star Wars scene where Princess Leia says, "Obi-Wan, you're my only hope."  Bisbee, dressed in costume, asks EcoHack participants for help, "Ecohackers, you're our only hope." "It's felt like a way we could show some respect to Carrie Fisher, to Star Wars fans everywhere, and create an awesome promotion for the event to encourage a diverse response for signups. So far, over 50% of the hackers who have signed up are women participants, and the age range is 13-65, so I think we are doing something right to make this an inclusive and empowering event for all."

Hackers will also receive free snacks, caffeination, computer labs, mentors, a mini-theatre, television studios, 360 cameras, stickers, t-shirts, and access to the Public VR lab all weekend. Participants will also have free access to a VR Bootcamp offered at BIG in Brookline the week prior to the hackathon to grow their skills no matter what their current skill or access level to to VR equipment.

Designed to provide innovative and interdisciplinary training for the next generation of content creators and storycoders and encourage climate change consciousness, this hackathon challenges teams to hack a solution to advance climate change awareness in educational settings.

In May of 2016, BIG co-founded the Public VR Lab, in partnership with their sister organization, Northampton Community Television (NCTV). Kathy Bisbee, BIG’s executive director and co-founder of the Lab, shared that the Lab was an extension of their community media arts centers, where they train content creators in multimedia, and now in VR, to develop content in the public and community’s interest.

BIG then developed a VR Academy to train users in all forms of VR creation. BIG  offers class in Unity, a coding engine for virtual reality content; in Blender-for the creation of 3D objects in VR, in VR Doodler- an illustration tool with a low-barrier to access, in Simmetri, one of Boston's featured VR startups and VR content creation tool; Cinematography and audio classes in 360 video; Aframe/Web VR classes and will offer additional advanced graphic design and programming classes.

Bisbee explained her vision, “VR is the birth of a new art form for telling stories, experiencing reality, and exploring spatial interactivity, so it makes sense to invest in building access and community participation in the VR space like the one we have already created inside of community-based filmmaking." She explained why climate change and VR seemed like an opportunity to challenge assumptions and create new compelling content, "VR content is more deeply personal because of its highly visceral and persuasively-real experience. Inside of VR, you can actually feel the physical threat and reality of sea-level rise when water starts pouring in all around you.”

Her organization, BIG, springs from the tradition of public access television, or community TV, a thirty-year old industry with roots in free speech, government transparency, and social documentary. Bisbee sees her mission as more far-reaching than just that. She wants to train the next generation of storytellers, promote creativity and skill development in VR-related technologies, and educate the next generation of coders and the IT crowd on climate change and media literacy. Last fall the Lab started a VR Academy and began providing free public demos weekly in their Brookline and Northampton locations, at the senior and teen centers and in public spaces, and organized meetups and hosted hackathons to help educate the community on these new tools.

Over 85 “ecohackers” have already signed up via the Hack's eventbrite link, but there's still time to Save the Planet: Hack the Future! Signup here: https://www.eventbrite.com/e/vr-ecohack-hacking-the-future-in-vr-ar-360-tickets-32803656620?aff=es2

ABOUT the Public VR Lab

The Public VR Lab is a collaborative effort to facilitate a public dialogue and projects around new VR-related technologies; to support the community creation of 360, virtual and augmented content, provide access to tools and headsets; and to generate socially-relevant and locally-focused public interest VR experiences. Brookline Interactive Group (BIG) and Northampton Community Television (NCTV) launched this VR accessibility and literacy initiative at their community media centers in Northampton and Brookline, MA, beginning in Spring of 2016, making it the first ever publicly-funded community VR center in the U.S.

Since then the Lab has offered free weekly public demos of VR experiences via the HTC Vive headset and controllers at both media center locations in eastern and western Massachusetts, at senior and teen centers, community fairs, and at pop-up public events, at awards and film festivals, and last fall created a VR Academy to teach community members how to create and view content in 360 video, Virtual Reality (VR) and Augmented Reality (AR).

The Lab held its first Meetup in Boston in August 2016 with speakers from the VR content creation team at FRONTLINE on their pioneering immersive journalism films and projects, and has since partnered with VR/AR Hackathons, with other mixed reality creators and labs, and in collaboration with Boston VR, Teach for America, Wayfair, Fasility, VR Doodler, Mass Media Literacy, Traces.io, LearnLaunch, VR at MIT, the Brookline Public Schools, Lifeliqe, Simmetri, VR- Before It's Too Late, ROTU, and the Transformative Culture Project, the Science & Media Awards Summit, the Pioneer Valley Game Group, and curated the interactive component of the 2016 Northampton Film Festival.

The Public VR Lab is the founder of the VR EcoHack, the first weekend-long hackathon focused on creating VR, AR and 360 video to promote climate change education, awareness and action: http://vrecohack.com/.