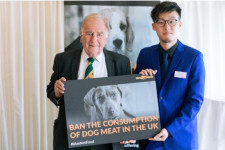 LONDON, April 20, 2021 (Newswire.com) - The UK has the longest history of animal protection in the world, and the British government often proclaims itself to be the global leader in animal welfare standards. Lobbying the UK to outlaw dog and cat meat, and to initiate the International Agreement to Prohibit the Eating of Dogs and Cats, has long been a priority for the World Dog Alliance (WDA).

In February 2016, the WDA launched an online petition on the UK Parliament website, calling on the government to take action on the dog meat industry in South Korea ahead of the Winter Olympics. The petition gathered 100,000 signatures from UK citizens in a matter of months, meeting the threshold for a parliamentary debate. In September 2016, the UK Parliament held a debate, and decided to raise the dog meat issue with the South Korean government through diplomatic means.

In December 2016, the Moran market, the largest dog meat market in South Korea, was shut down.

Inspired by the success of the petition, the WDA soon started a lobbying campaign for a national ban on dog and cat meat in the UK. Sir Roger Gale, a veteran member of the British Parliament, has been a strong supporter for this movement.

Sir Roger Gale, 77, is one of the longest-serving and most respected members in the UK Parliament. Since being elected as an MP in 1983, he has been appointed as a member of a wide range of committees.

During his meetings with the WDA, Sir Roger Gale shared his advice on the legislative campaign, and introduced the WDA to the Conservative Animal Welfare Foundation. In March 2020, 67 MPs, including Sir Roger Gale, co-signed a letter to Prime Minister Boris Johnson to express their support for the International Agreement to Prohibit the Eating of Dogs and Cats as below:

"We are writing to express our support for the international animal welfare organisation, the World Dog Alliance, and its campaign to ban the human consumption of dog and cat meat across the world."

"The UK is the perfect country to be a lead signatory for this International Agreement…Such action would strongly reaffirm the UK's position as a world leader in animal welfare standards."

Unfortunately, the WDA's legislative campaign in the UK has been suspended due to the COVID-19 pandemic. In March 2021, the Department for Environment, Food and Rural Affairs (Defra) responded to the parliamentary letter:

"It is already illegal to sell dog meat for human consumption and the Government has seen no evidence that dog meat is being sold or consumed in this country."

"The International Agreement has obtained solid support in the United States, the UK and Japan and I would like to think that notwithstanding the fact that there is a claim that 'dog meat is not eaten in the United Kingdom' we shall no longer find it appropriate the shelter behind this fig leaf and to endorse the proposed International Agreement."

Being knighted by the Queen is one of the highest forms of honor in the UK. Having served in the Parliament for nearly 40 years as the voice for those who cannot speak for themselves, Sir Roger Gale is well worth his title. The WDA hopes that the International Agreement can help spread his animal-loving spirit to the world. 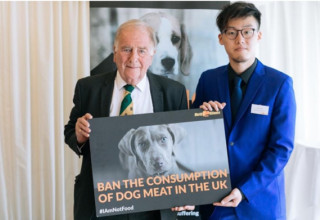 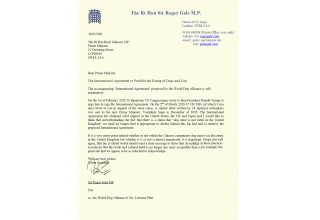