The Largest Pole event in Atlanta, the Georgia Pole Fitness Classic (GPFC) is a regional pole fitness and physique competition hosted by Atlanta's #1 alternative fitness studio for women, Vertical Joe's and a part of the Pole Championship Series. Featuring the best Pole Athletes in the state of Georgia and is sponsored by Vertical Joe's and X-Pole - The Official Pole of Pole Dancing. Nicole "The Pole" Williams who appeared in Bruno Mars' "Gorilla" and Rihanna's "Pour it Up" videos will emcee. 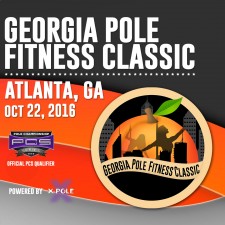 Atlanta, Georgia, September 22, 2016 (Newswire.com) - Vertical Joe’s Fitness Presents The Georgia Pole Fitness Classic Competition in Atlanta on October 22 at 8:00pm. The event is Atlanta's 1st qualifier for the Pole Championship Champions Series at the Arnold Sports Festival in March 2017. Fans can watch all the excitement The Atrium - 5479 Memorial Drive in Stone Mountain, Georgia.

The Largest Pole event in Atlanta, the Georgia Pole Fitness Classic (GPFC) is a regional pole fitness and physique competition hosted by Atlanta's #1 alternative fitness studio for women, Vertical Joe's. The event will be a spectacular alternative fitness and dance style show featuring the best Pole Athletes in the state of Georgia and is sponsored by Vertical Joe’s and X-Pole - The Official Pole of Pole Dancing. The event emcee is Nicole “The Pole” Williams who appeared in Bruno Mars’ “Gorilla” and Rihanna’s “Pour it Up” music videos.

The Flying Ballerina, Superman, Drama Queen, Goldrush and the Hero are just a few of the super human moves that the competition judges can expect to witness from the competitors. This isn’t figure skating or gymnastics -- rather the athletic and artistically graceful sport of pole fitness. Pole fitness is exploding on the competitive level and flourishing as a workout among women and men. There are currently thousands of pole fitness studios around the world. The sport of Pole Fitness has also become extremely popular on the international scene over the past several years. With some 1,500 Pole studios across the country, Pole and Aerial fitness have become a popular bonding activity for women of all ages, and men. The Georgia Pole Fitness Classic focuses and promotes the art and sport of Pole Fitness.

The Pole Championship Series (PCS) is a professional pole fitness league comprised of premier pole competitions throughout the world.  The PCS governs and selects the most recognized and respected pole athletes from around the globe. PCS Competition cities include Hong Kong, Mexico City South Africa and Brazil. The professional champion of each competition advances to the annual PCS Championship at the Arnold Sports Festival. Competing in the PCS Championship is the highest level honor for an elite pole athlete. The winner of the PCS Championship becomes the overall PCS Champion. The GPFC will be the first PCS qualifier ever in the Atlanta area! The PCS season runs from March - March. Lindsey Kimura, President of the PCS said, “Pole fitness is the fastest growing new sport among women ages 16 to 35. The new pole fitness is more Cirque de Soleil meets rhythmic gymnastics centered around a vertical pole.”