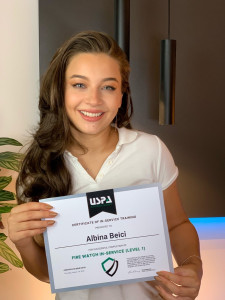 MIAMI, September 2, 2022 (Newswire.com) - USPA Nationwide Security has announced the launch of their Artificial Intelligence Security Training Program that is being rolled out this week to train the 5,000+ security contractors who perform services for the international security conglomerate. After nearly 11 months of research and development, USPA's CEO, Dan Manning, says the AI, while costly and time-consuming to develop, will save the firm millions over the next decade and leaves no carbon footprint. "Training security contractors with our new technology allows them to learn at their own pace and at their convenience anywhere in the world."

The first course developed by USPA is their Fire Watch In-Service Level 1 Series, which consists of two hours of lessons by fully responsive AI instructors. By activating the student's camera and microphone, the AI can sense movement, sound and even read lips, which will generate a response.

USPA's artificial intelligence is machine-learning technology, capable of training thousands of security officers simultaneously; a task that traditionally required human cognition, flights, hotels and a lot of time. By combining components from computer and cognitive science, linguistics, psychology, neuroscience, as well as mathematics, the AI learns, teaches and responds in a human-like manner.

Operating in 50 states, USPA is a nationwide security guard firm, specializing in close protection officers, fire watch guards, secure transport and maritime security. With franchise offices in most parts of the USA and security contractors across the globe since 2005, USPA leads the industry in terms of technology, green initiatives and overall customer service. The firm also donates a large percentage of their profits to Kingsman Philanthropic Corp. to fund the rescue of women and children from trafficking.