Peter Sadabseng, former painter and current co-owner of Battle Born Autobody in Carson City, NV, knows that if he wants to expand, he will need to use top tier equipment and products to achieve his lofty goals.

A hands-on owner who isn’t afraid to do whatever it takes to succeed, Sadabseng acquired a USI North America drive-through spray booth for a wide range of reasons—and facilitating the growth of his business was a huge part of it.

“Every year we grow more, and we want to continue on that same path,” Sadabseng said. “By acquiring this amazing booth from USI, we are moving in that direction. We have only been using it for less than six months now, but we can already see that this is going to enable us to get to the next stage.”

After working at another shop in Carson City for several years, Sadabseng, his brother Phouvay and two other associates partnered to open up Battle Born Autobody in 2013, he said.

“For many years, a good friend of mine, Terry Layland, kept telling us that we should open our own shop. So, when we finally decided to go ahead, he was happy to invest in the company. We also brought on Steven Olivas, a body man, onboard because I had worked with him before and knew he was very talented. All four of us are hands-on owners, and that’s why we step in whenever needed,” Sadabseng said.

Battle Born Autobody is now repairing 35–40 cars weekly and flourishing in a small town with only 7–8 other collision shops.

“I grew up here and know all of the other shops,” he said. “We are competitors, but we also work together because there is enough work to go around. To differentiate ourselves from the other shops, we have to stand out in the area of customer service. That’s why we are able to receive a ton of 5-star reviews on social media and get a lot of referrals as a result.”

For many years, working with the local new car dealerships in Carson City helped improve the bottom line at Battle Born.

“We are very loyal to the dealerships because they brought us a lot of business when we started,” Sadabseng said. “We do a significant amount of their lot work and repair cars that get damaged while being transported. They also refer us to their customers all the time, and that’s why we always come through for them—without them, we wouldn’t be here.”

When Sadabseng began looking around for a spray booth, he only seriously considered two companies. But after seeing the USI North America booths in action, it was an easy decision, he said.

“We called our paint jobber, and he confirmed that USI was a premier product,” he said. “They flew us out to California, and once we saw a few demonstrations, we were immediately sold. We watched two painters painting a car together inside the USI Chronotech, one on each side of the vehicle, and not one drop of paint got on either of them. So we could see that the air movement was incredible, and that’s why we never need blowers with this booth.”

Battle Born is saving time and money with its USI booth, which makes it a win-win situation across the board for the busy shop.

“We’re saving time when it comes to baking these cars, and that is going to really help us even more when we grow this business,” Sadabseng said. “In addition, we are saving money on our gas bill with the Chronotech, which is huge. The efficiency of this booth is impressive and the support that we’ve received from USI is outstanding.”

By using USI’s online support system, the shop is able to stay up and running all the time and roll along at a steady rate.

“We have only had to use it once or twice, and each time the solution was easy and straightforward,” he said. “Instead of waiting for someone to come here and figure it out, they helped us online, and 10 minutes later we were back up and running.”

Phouvay, the shop’s head painter, has quickly embraced every feature of their new USI booth, including the Easy Paint System (EPS) that automates every aspect of each paint job.

“He loves it,” Peter said. “The EPS controls the entire painting process, so we don’t have to guess. Once we enter the information, the system goes for the most efficient process with each vehicle, saving us time, money and product. Phouvay started using it immediately and wouldn’t want to do it any other way now. As the collision industry changes, we need to be on the cutting-edge to stay competitive and grow, and our new USI booth is doing exactly that.” 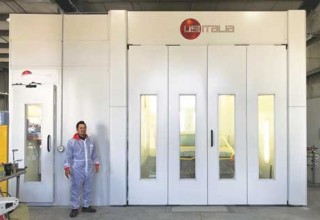 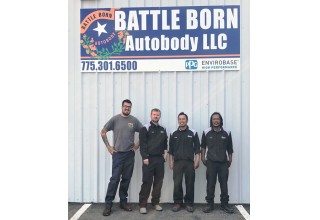 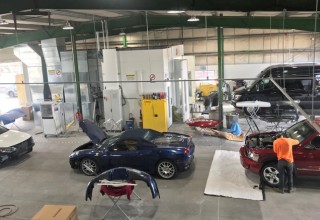