The folk rock band Two Penny Blue have given the first look at their debut album 'Let's Say', with the release of the single and video of 'Blondie'. 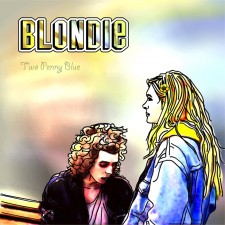 LONDON, September 29, 2017 (Newswire.com) - The folk rock band Two Penny Blue have given the first look at their debut album ‘Let’s Say’, with the release of the single and video of ‘Blondie’.

Giving a hint of what’s to come, ‘Blondie’ is a song about going from insecurity to empowerment, following a boy’s love and obsession for a blonde headed bombshell.

New kids on the block Two Penny Blue, also known as Tommy, Will and Sean, began to gain notoriety earlier this year following the release of singles ‘Gypsy’ and ‘Lament’. ‘Blondie’ marks the run-up to the launch of their debut album ‘Let’s Say’, due for release on 23rd October.

Frontman and songwriter for the band Tommy Gathers described the single saying: “‘Blondie’ is sort of based on a relationship I had. It wasn’t much of a relationship to talk about but one thing I distinctively felt was feeling inferior all the time. It’s such a painful feeling where you put yourself into perpetual anxiety about silly things. I love singing this song, I totally let loose usually blowing my voice after. It’s pretty raw, it’s pretty juvenile, but there is a maturity at the end, there is the realisation that relationships shouldn't make one feel this way. It's a lesson people have to go through I suppose.”

For those new to Two Penny Blue, they’re an alternative folk rock band, but they’re unique in that they’re also bluesy, grungey, and a little bit rock and roll. Describing themselves as the antidote to political drama and your Monday morning commute, anyone who’s seen them perform live knows they’re here to entertain. Their songs and the stories behind them tread the line between serious and ridiculous, just like them.

“It’s the first release from our debut album ‘Let’s Say’, which is about the development from childhood, to a teenager, to the first steps into adulthood. This song comes into the middle of the album and hits right in that part of the crossover from childhood to adulthood”, said Tommy Gathers.

‘Blondie’ is available for download from iTunes and Spotify from today.

For more information, promo requests or to set up an interview, please contact press@twopennyblueband.com.

Blondie is recorded and distributed by Convivium Records. 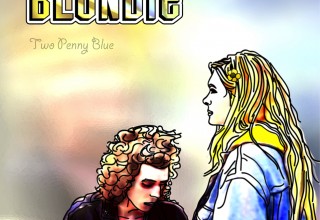 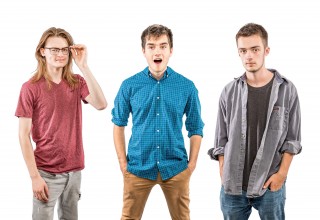 HOW ARE WE? WE'RE TOMMY, WILL AND SEAN. WHAT ARE WE? WE'RE AN ALTERNATIVE FOLK ROCK BAND. BUT WE'RE ALSO BLUESY, AND GRUNGEY, AND A LITTLE BIT ROCK AND ROLL. WE'RE THE ANTIDOTE TO POLITICAL DRAMA AND YOUR MONDAY MORNING COMMUTE.