Twin Cities home buyers face a widening gap in building versus buying costs, while the dollar volume of new construction sales in the metro is down -32.6%, according to Northstar MLS. Minneapolis metro housing expert Home Destination of RE/MAX Results comments on the findings and the clarity this offers to prospective home buyers in the Twin Cities. 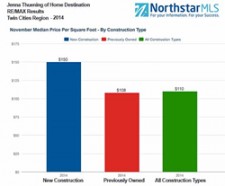 December 30, 2014 (Newswire.com) - Twin Cities home buyers face a widening gap in building versus buying costs, while the dollar volume of new construction sales in the metro is down -32.6%, according to Northstar MLS. The national difference between a new home versus a pre-owned home that has historically run between 15 and 20 percent has escalated to a disparity of 30 to 40 percent, according to Lawrence Yun, NAR Chief Economist and Senior Vice President in a December 30 post titled Home Price Comparison: New versus Existing.

"Whether buying a newly built home or one that's been previously lived in, both have their advantages and both have buyers who love them," says Jenna Thuening, owner of Home Destination. "Wanting the benefits of a new Twin Cities home is one thing; paying for the higher cost upfront is another matter."

Existing homes have historically proved to be less expensive per square foot; today's recent figures show that is truer than ever. Escalating costs to purchase a lot in a prime locations can be daunting, making it more reasonable to build in new subdivisions. Prospective Minneapolis home buyers need to factor in that costs are more straight forward to predict in a new home, when compared to the cost of a home code upgrade or remodeling an existing historical home.

Source: Housing data is drawn from Northstar MLS on December 31, 2014.

1. A Welcome Shift Back to the Dominant Traditional Homebuyer and Seller Sector

New home construction costs run higher than the cost of buying an existing Twin Cities home. The hefty premium over existing homes is partly due to rising costs in material, labor, and added time to meet more stringent building code. The difference between a new home versus a pre-owned home has historically run between 15 and 20 percent. Not so today. It has escalated to a disparity of 30 to 40 percent. With a insufficient number of new homes being built, we may expect to see the same trend in 2015.

2. Big Difference in Median Price of New Homes in the Twin Cities

November's housing data reveals that nationally, the median home price of a new home ran $280,900 while the median price of an existing home for sale was $206,200, according to NAR. That created a difference of 36 percent.

The level of new home construction is short of demand. Reports that single-family housing starts have climbed for the fourth time in the past five years, the pace still reflects a deep recession baseline. Single-family housing starts are predicted to hit 650,000 at the completion of 2014. A healthy and normal figure would be closer to a million or above. The long-term shortage in new housing supply is a major contributing factor behind the fast acceleration in home prices. "From 2004 to 2014, a typical newly constructed home price will have risen by 27 percent," NAR says.

4. Shortage of New Construction Adds to the Cost of a New Home

Nationally, the average existing home price has increased by considerably less - 25 percent in the past three years. That looks aggressive when compared to the 10 year growth in home prices, which is only 8 percent. Over the same time span, from 2004 to 2014, the average rental cost for an apartment increased by 31 percent. NAR concludes that "the shortage of new construction is leading to the premium on the new homes to expand".

Through quarter 3 of 2014, the Twin Cities had a total of 4,258 new housing units started (including single-family detached homes, town houses, and duplex units). This represents a drop of 7.4% compared to the first three quarters of 2013.

Metrostudy put out a post titled New Home Activity Slowing as 2014 Comes to a Close on November 11, to sizing up new construction activity ahead of the year's close. It expects 2014 will finish out flat and "see little to no improvement in the pace of new home construction and sales, with 2015 not promising much better". Metrostudy assessed the Twin Cities new construction market as hindered by supply issues and was weaker than other professional opinions by describing the metro's economy with a "temperature lukewarm at best, though improving".

About Home Destination - Twin Cities Real Estate:
Home Destination offers a loyal and committed real estate professional service that personally handles all of the details of selling or purchasing homes in the Twin Cities. Highly regarded by peers as a Minneapolis metro expert for over 15 years, gain a skilled representative as guide to make the best possible housing decisions. Jenna Thuening has the real estate experience and acumen buyers and sellers benefit from. Learn more about the cost of buying a new Twin Cities home versus and existing home.