Tupac:187 Suggests That Suge Knight Had Nothing to Do With the Murder of Tupac Shakur

Tupac:187 is an examination of the 15,000 pages of case files in the murder of Tupac Shakur and Biggie Smalls. Many of the documents examined have been purged from the current case files. Suge Knight was driving the BMW when the white Cadillac drove up alongside where shooters fired 13 rounds into the car. Suge Knight, simply put, was not involved in the murder of Tupac Shakur. 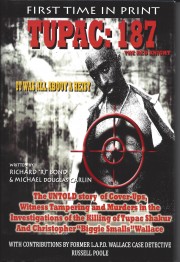 los angeles, ca, May 13, 2015 (Newswire.com) - ​The rumors that Suge Knight was responsible for the murder of Tupac Shakur have been swirling for years because Suge Knight had a motive—money. Suge had a lot to lose if Tupac left Death Row Records and he had a lot to gain from Tupac's death. Back then the perception was that Suge Knight was Death Row Records. The contracts were all drafted in the name of the record label—not with Suge personally.

The rumor that Suge was behind the murder of Tupac had legs because of the money motive associated with Death Row Records retaining the revenue that Tupac Shakur generated. Tupac had worked hard to fulfill his contract by laying down tracks that were in the vault ready to be released. Some 200 tracks had been recorded in a short time and Death Row Records had possession of those tracks. If the matter went to court Tupac might be successful in winning the rights to the recordings. If Tupac died there would be nobody to contest ownership—at least that was the thinking at the time.

To set the record straight, Suge Knight was not responsible for the murder of Tupac Shakur.

But the one question that has never been answered until now is: "Why would Suge Knight put himself in the vehicle if he was planning to have Tupac killed?"

Tupac:187 is an examination of the 15,000 pages of case files in the murder of Tupac Shakur and Biggie Smalls. Many of the documents examined have been purged from the current case files. These documents were photocopied at the time and kept safe so that the truth could come out. When a Confession Letter surfaced in 2014, the documents were also examined in the context of that Confession Letter to give the writers a better understanding of what happened that night.

The truth is that Suge Knight possessed the means to kill Tupac Shakur. He had ample opportunities to kill Shakur in many ways that would not put him also in the cross hairs that night. If Suge wanted Tupac dead it would have unfolded in a much different way. Suge Knight was driving the BMW when the white Cadillac drove up alongside where shooters fired 13 rounds into the car. Suge Knight, simply put, was not involved in the murder of Tupac Shakur.

The Confession Letter tells that both Tupac Shakur and Suge Knight were meant to die that night. The murderers wanted to take over Death Row Records—worth a billion dollars at the time. They also wanted the rights to Tupac's music according to the letter. The letter, written in 1998, names the shooter of Tupac Shakur.

If we trace back the rumor about Suge being the murderer where does it come from? It comes from the man on the plane ride back from New York, on September 4th, who asked Tupac repeatedly if he was coming to Las Vegas. It comes from the same artist that thought Tupac and Suge were going to have him killed at the time. It comes from the same artist that was abandoned by his own security detail on the night of May 1, 1998 at the Universal Amphitheater. The Los Angeles County Sheriff’s Department rescued that artist as gang members who appeared to do him harm surrounded him. The artist told Sheriff's that Suge Knight was behind the murder of Tupac Shakur. They told others and the rumor took flight.

Is it any surprise that the shooter named in the confession letter is the cousin of the artist that started the rumor that Suge Knight was behind the murder?

Whatever crimes Suge Knight may have committed he is certainly not guilty of the murder of Tupac Shakur. On the night of September 7th 1996, Suge Knight was a victim and he was the target of the assassination. When many of the same group gathered together, six months later, to kill Biggie Smalls at the Petersen Museum they chose a professional shooter, used GEKO armor piercing ammunition, and kept the gangs out of their operation. A Black SS rolled up alongside Biggie's car and a tight pattern of shots hit only Biggie Smalls. Tupac lingered for a number of days, Biggie Smalls died almost instantly. The different result was due to changes employed through the lessons the murderers learned on September 7th, 1996—the night Suge Knight and Tupac Shakur were "green lit" to be executed.

About Tupac:187: RJ Bond, Michael Douglas Carlin, and former LAPD Detective Russell Poole pour over the evidence of the murder, how the guilty evaded prosecution, and then they unravel the lies that have kept justice from being served to the guilty. Tupac:187 is the definitive voice on the murders of Tupac Shakur and Biggie Smalls.

Author of Tupac:187 Calls on LAPD to Reopen Investigation Into Murders of Tupac Shakur and Biggie Smalls
At a recent meeting of the Los Angeles Police Commission, Michael Douglas Carlin, called upon LAPD to reinvigorate the investigations into the murders of rappers Christopher Wallace aka Biggie Smalls aka Notorious B.I.G. and Tupac Shakur. New evidence as detailed in Tupac:187 leads me to believe these cases can be solved.
American News Service - Jun 2, 2015