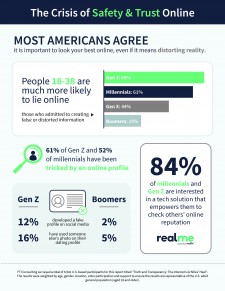 LOS ANGELES, March 10, 2020 (Newswire.com) - ​With over 50 million people in the U.S. currently using online dating apps or websites, chances are you’ve swiped right on a fake or disingenuous profile. In a new FTI Consulting report supported by RealMe, researchers found online dating has given way to new forms of falsehood and deceit. The study reveals this societal phenomenon as “Generation L,” or “Generation Liar,” which refers to people across all generations who believe it is important to look their best online, even if it means distorting reality. These findings and the issue of online dating safety were the key themes discussed today at Global Dating Insights (GDI) New York 2020, the leading online dating conference that brings together some of the biggest names in the industry.

In response to the Internet’s need for greater transparency online, RealMe was introduced at GDI New York as a turnkey, no-cost technology solution to protect dating app users. The company's innovative new tool, Check, is a much-needed platform integration that empowers online daters with trustworthy in-app identity scans and more than 325 million personal background profiles powered by MyLife. In addition, the company has teamed up with Spectrum Labs, a contextual AI platform that looks beyond keywords to identify larger patterns of toxic behavior to deliver an end-to-end safer dating solution for the dating industry.

“What this FTI Consulting report reveals is the Internet has given way to an entirely new societal trend, ‘Generation Liar,’ where online fraud is not only committed in soaring numbers but also expected by most people,” says Jeff Tinsley, founder of RealMe. “Researchers also found that the majority of online daters were interested in a tech solution that would empower them to check people’s reputations online. That’s where RealMe can help - it’s a tool to support dating apps and other online marketplaces in establishing greater security and protection for both its users and the companies behind them.”

FTI Consulting’s report demonstrates that the lack of honesty online is problematic for users of dating apps and anyone attempting to do business online. Researchers surveyed a total of 6,541 U.S.-based participants for this report. The results were weighted by age, gender, location, voter participation and support to ensure the results are representative of the U.S. adult general population (aged 18 and older). Some additional highlights within the FTI study revealed:

●      Nearly half of Americans agree it is “important to look your best online, even if it means distorting reality.”

●      While people from all generations admitted to lying online, the study found that over 50% of people between the age of 18-38 are much more likely to do so - in fact, the younger the online dater, the higher the chances of lying on an online profile.

●      Sixty-one percent of Gen Z and 52% of Millennials have been tricked by an online profile, compared to an average of 44% of Americans.

●      Nearly 69% of Gen Z and 61% of Millennials admitted they had created false or distorted information on their social media accounts, compared with 44% of Generation X and 19% of Baby Boomers.

RealMe is a transformative new technology solution providing a turnkey, no-cost way to protect people on dating apps and other online marketplaces. Dedicated to building a new era of trust and transparency across the U.S. Internet, RealMe created Check, a revolutionary platform and e-marketplace integration that empowers users with trustworthy identity scans and instant access to more than 325 million personal background profiles powered by MyLife.

In addition to sharing billions of data points compiled by public records and data sources, Check by RealMe is the first online security solution to include an individual Reputation Score for each personal profile shared. Reputation Scores are regularly calibrated based on a person’s unique background information, criminal and arrest records, financial records, legal records, and more, and offer dating app and other online marketplace users fast and straightforward reputation insights and validation like never before.