BRIDGETON, N.J., November 15, 2018 (Newswire.com) -  The largest American Indian tribe in New Jersey has secured restoration of its status as a state-recognized tribe, concluding a controversy that drew national attention for its contentious litigation in federal and state courts and significance to tribes throughout the nation. The office of New Jersey's attorney general Gurbir Grewal has settled the tribe's civil rights lawsuits, conceding that the state officially recognized the 3,000-member Nanticoke Lenni-Lenape Tribal Nation in 1982 and regularly reaffirmed formal recognition over three decades.

Attorneys general under former Governor Chris Christie permitted efforts to undermine the tribe's status in communications with federal and state agencies. The tribe lost access to federal grants to improve members' health, education and workforce preparedness and to contracts won by highly rated tribally owned businesses, as well as the right to label and sell elders' traditional arts and crafts as American Indian-made. The state will now actively reaffirm its prior recognition and assist the tribe in regaining the opportunities and rights it lost. The settlement also provides $2.4 million in financial compensation to enable the tribe to rebuild its cultural and economic development programs.

If the character of a nation is measured by how it treats its most vulnerable people, then today we have reason to celebrate this restoration of justice, but we all must do much better by our Native brothers and sisters.

Greg Werkheiser of Cultural Heritage Partners PLLC, legal counsel for the tribe, stated, "If the character of a nation is measured by how it treats its most vulnerable people, then today we have reason to celebrate this restoration of justice, but we all must do much better by our Native brothers and sisters."

The tribe's lawsuits alleged that the state's attempts to withdraw recognition were motivated by racial stereotypes attributing to all American Indian tribes a desire to conduct casino gaming, as well as irrational belief that state recognition leads to federal gaming rights. Most American Indian tribes do not conduct any casino gaming and the Nanticoke Lenni-Lenape have always prohibited reliance on gaming and other vices for income. The earliest efforts to disavow the tribe coincided with the period of Donald Trump's ownership of Atlantic City casinos and the industry's misplaced fear that acknowledging tribes' continuing existence could lead to competition.

The Nanticoke Lenni-Lenape sued the attorneys general in the U.S. District Court for the District of New Jersey as well as in the Superior Court of New Jersey, Law Division, Mercer County, for violations of their federal and state constitutional rights to due process and equal protection. In a 42-page opinion denying the state's motion to have the case dismissed, District Court Judge Renee Marie Bumb found the tribe's allegations of impermissible race-discrimination viable. The tribe identified dozens of instances over 30 years in which the state affirmed and celebrated the recognition of three tribes, including in two state statutes where the tribes are specifically named and referred to as "the three New Jersey tribes." By contrast, the tribe compelled the state to disclose documents revealing that top officials evaluating the tribe's status ignored the abundant record of prior recognition and instead allowed their consideration to be colored by racial stereotypes. The tribe recently moved for summary judgment in federal court with a 1,000-page filing, and the settlement was inked as a decision was pending.

The litigation drew sustained national attention because of its implications for the hundreds of thousands of members of 61 other historical American Indian tribes that have received recognition by states but are not on the Bureau of Indian Affairs list of federally recognized tribes. State-only recognition is most prevalent in 16 states where European settlers first encountered indigenous peoples, but where violence, disease and 20th-century government-sanctioned racial discrimination took a heavy toll on Native populations and the ability of the tribes to prove their modern existence. Werkheiser observed, "The outcome of this dispute should put states on notice that even the most vulnerable tribes have constitutional rights to due process and equal treatment when it comes to official acknowledgment of their identity."

Tribal Principal Chief Mark Gould stated, "This fight to restore recognition has been lengthy, costly and sad. But today, New Jersey has reaffirmed that American Indians are not only part of its storied past, but valued partners in a shared future. We are ready to do our part to rebuild our relationship with the state government." 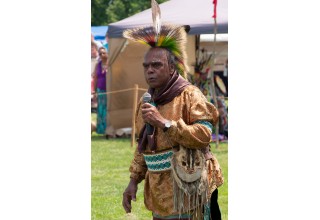