Treading Yesterday LLC announces a Red Carpet Premiere for its new LGBT series to be held in Long Beach California on December 6, 2015. 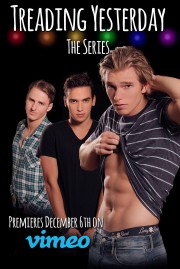 Los Angeles, California, November 30, 2015 (Newswire.com) - Treading Yesterday, an original LGBT series will hold a Red Carpet Premiere on Sunday December 6th at 6:30 PM at the Art Theatre in Long Beach, California.  A panel discussion including actors, the director and the series creator will follow the debut of the series pilot episode.  The Red Carpet premiere coincides with the series release on Vimeo On Demand at 10:00 PM Eastern Standard time.  The selection of the first Sunday in December for the series debut correlates with the fifteenth anniversary of Showtime’s Queer as Folk series launch.

Treading Yesterday plays out through a multi-decade storytelling witnessed through the eyes of Eric, a soon to be middle aged gay man, who has lived what appears to be a charmed life.  The pilot episode opens as a present day drama however by midpoint the time line resets to 1988, in a historical fiction format, during a period of time when monumental anti-gay backlash had been orchestrated.

Treading Yesterday juxtaposes 1988’s intolerance of Gays with present day acceptance while at the same time revealing the inherent challenges existing in both environments.  Craig Bettendorf, the series writer and creator recently stated, “If any are in doubt about the importance of such work in affirming the LGBT community, just take a moment and consider the recent repeal of LGBT rights that occurred just a few weeks ago in the nations 4th largest city.”

Treading Yesterday has developed a robust fan base utilizing Facebook and social media to interact with friends and fans every step of the way throughout the series creation.  News, Media and Entertainment agencies are invited to attend the Red Carpet Premiere and are asked to make contact as outlined below.