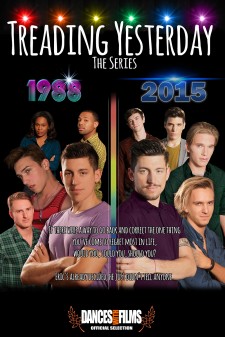 Los Angeles, California, May 26, 2016 (Newswire.com) - TREADING YESTERDAY, an original dramatic series plays out through a multi-decade storytelling witnessed through the eyes of Eric, a soon to be middle aged gay man, who has lived what appears to be a charmed life.  The series has been selected to premiere its TV pilot episode during DANCES WITH FILMS XIX to be held at the TCL Chinese Theater in Hollywood, California on June 10th at 4:00 PM.    DANCES WITH FILMS has a long standing, respected reputation for identifying emerging talent, offering them the opportunity of exhibiting their work in the heart of the entertainment industry.

Series Writer and Creator Craig Bettendorf states that he couldn’t be happier to be among DWF’s official selections: “DANCES WITH FILMS offers those of us unknown to industry insiders the opportunity of sharing our work with the world.  DWF’s founders truly understand the difficulty that comes after the cameras stop rolling and the filmmaker is left to navigate the difficult waters ahead.”

"DANCES WITH FILMS offers those of us unknown to industry insiders the opportunity of sharing our work with the world."

Craig Bettendorf, Writer and Creator of Treading Yesterday, the series

Bettendorf, no novice to LGBT subject matter spent the better part of the 1990's as an activist organizing, promoting and finding the common ground and understanding necessary to form acceptance and inclusivity for members of the LGBT community.  This work led him to be among the principle signatories of 1996's National Freedom to Marry Resolution (predecessor to Marriage Equality) denouncing the Federal Defense of Marriage act as well as the honor of presenting to the students and faculty of the Harvard Divinity School in 1999.

The pilot episode of Treading Yesterday opens as a present day drama however by midpoint the timeline resets to 1988, in a historical fiction format, during a period in time when monumental anti-gay backlash had been orchestrated. The series clearly benefits from Bettendorf's personal experience as both a gay man and former LGBT community activist as the storyline juxtaposes 1988's intolerance of Gays with present day acceptance while at the same time revealing the inherent challenges existing in both environments.

Episodes of Treading Yesterday currently can be found on Vimeo On Demand while its producers search for a permanent network or streaming service home.  One only needs drive down Sunset Blvd to witness the huge billboard calling for better representation of LGBT people in television programing.  The creator and producers of Treading Yesterday hope to bridge that gap by offering an original series that is both entertaining and thought provoking.