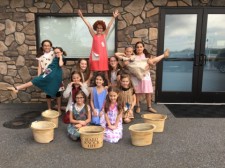 Studio owner Tracey Smith moved her academy to a new location in December. While she was moving her academy to its newest location, Smith's father was diagnosed with a deadly form of brain cancer, forcing she and her husband to dedicate their time and financial resources to the care of Tracey's father, leaving little behind for the preparation of her new studio.

Tracey will have the choice of either $500 in Greatmats dance studio products or a $350 cash option which will be used toward Tracey's Academy of Dance.

Atkinson Dance Academy of Atkinson, Nebraska, was named winner of the second prize, which entitles it to either $300 in Greatmats products or a $225 cash option.

BusyBodies Dance Company of Harvey, Louisiana, won the third prize of either $200 in Greatmats products or $125 in cash.

Also making the finals were: AB Studio One of Somerset, Kentucky, and The Studio: Opening Number Dance Company of Yates Center, Kansas.

Dance Studios from 19 different states were represented in the contest.

Greatmats is a national dance and specialty flooring industry leader based in Milltown, Wisconsin, since 1999. Greatmats gives back to its local community by donating 5 percent of its annual profits to local non-profit organizations, and supports green initiatives through the use of solar energy, recycled and renewable resources.