Achieving Diversity Behind and in Front of the Camera, "The Place We Hide" Explores the Connection Between Choice and Reality 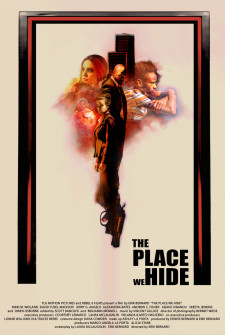 SEATTLE, December 1, 2020 (Newswire.com) - TLG Motion Pictures announces the release of its latest film, "The Place We Hide," a psychological thriller written and directed by Black filmmaker Erik Bernard, with co-writer Laura McLaughlin and executive produced by Courtney LeMarco. Available to rent on select streaming platforms and OnDemand beginning December 1, the film showcases how life is a culmination of choices and events that shape the world we live in and who we choose to become.

"The Place We Hide" begins with the murder of a patient to Dr. Stevie Fleming (Nikki M. Weiland), an ambitious and confident hypnotherapist. Set to publish her first book on hypnotherapy, Dr. Fleming has also finally gathered the courage to stand up to her exploitive ex-husband who has been leeching off her success. Her life takes an unexpectedly dark turn after she gets trapped in an elevator with a stranger, Jack (David Yusel Madison), who she soon discovers to be a righteous hitman contracted to deliver his special brand of justice.

"While writing 'The Place We Hide,' we wanted to illustrate how life is a culmination of choices and events that directly impact us in our day-to-day lives and how we perceive our reality," said Bernard. "We use these two characters, Dr. Stevie and Jack, both shaped by tragedy and dark secrets, to uncover this world and dive deeper into the most important choice that we all face - the choice of who we choose to become, in spite of the external forces telling us otherwise."

Director and Producer Erik Bernard is a U.S. Army Veteran and pilot who recently turned his focus toward writing and producing. In addition to "The Place We Hide," he produced the feature film "Artik" and executive produced the film "The Village in the Woods," both released in 2019.  Bernard is also an award-winning screenwriter, where his exciting plots garnered attention from international festivals and competitions. He is also the executive producer of the hit television show "Hoarders" under TLG Motion Pictures.

"The Place We Hide" will be available to rent on iTunes, Prime Video Direct, Google Play, Fandango, Vudu, Vimeo, Sony PSN and Microsoft. The film will also be available On-Demand across major cable companies including Comcast, Cox Cable and Verizon FiOS, as well as DirectTV, Dish Network and Sling TV. Watch the trailer now.