The Nevada Society of Scottish Clans a 501(c)(3) nonprofit organization dedicated to the perpetuation of ancient customs, literature, music, games and dress of Scotland and its people recently awarded Brett Palmer of Clan Scott ancestry with the prestigious 2017 Silver Thistle Award. 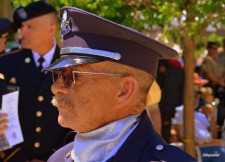 Reno, Nevada, February 13, 2017 (Newswire.com) - Brett Palmer was selected as the Society’s 2017 Scot-of-the-Year for his dedicated service to our veterans. Palmer joined the Marine Corps immediately after high school, but his tour was cut short by an injury.  A couple of years later he began a 36-year career in law enforcement.  His first positions were in Idaho and Utah before being hired by the Lyon County Sheriff’s Office in Nevada where he served the last 18 years as patrol deputy in Fernley.

Soon after retiring from the Sheriff’s Office in 2008, he became president of the Nevada Veteran’s Coalition (IRS recognized charitable organization) - a full-time position he still holds today.  The purpose of the Coalition is to support and provide services to the Northern Nevada Memorial Cemetery near Fernley and to assist local veterans.

One of the first things that Brett formed after becoming president was an Honor Guard for all veteran interments in the memorial cemetery.  The unit, which consists of Coalition volunteers, provides about 300 military honor style burial services annually.  Besides the highly precision honor guard, the service includes a color guard, chaplain, vocalist, and rifle team.

As chief administrator, Brett coordinates the Coalition’s Memorial Day activities, laying of wreaths in December, and the interment of unaccompanied or unclaimed remains.  Over 3,600 people attended the Coalition’s Memorial Day at the cemetery last year, making it the largest such ceremony in the state.  Last month, 1,700 volunteers in conjunction with the national Wreaths Across America project, placed 7,500 wreaths on all of the headstones in the cemetery.  The Coalition partners with the national Missing in America Project in locating unclaimed cremated remains of American veterans in mortuaries, identifying them and providing proper interment.  To date, the Coalition has interred 44 unclaimed remains in the cemetery.  In addition, each month the Coalition performs honor services for unaccompanied remains of veterans that the memorial cemetery receives from throughout the nation.

Besides his burial responsibilities, Brett also coordinates the Coalition’s participation in the Certified Nevada Veteran Advocate program that provides guidance to Nevada’s veterans.  Lastly, he directs the Coalition’s Heroes Hand Up House in Fernley, a program he created, that provides temporary housing for deserving veterans and their families in transition from the military to civilian life.

Scottish immigrants and their descendants in Nevada have continued traditions imported from the homeland. The state celebrated its first National Tartan Day on April 6, 1998. In 2001, NRS 235.130 State Tartan, was passed by the Nevada Legislature designating an official state tartan for the State of Nevada. The colors and design of the tartan feature the colors that make Nevada a unique and bountiful state.

About the Nevada Society of Scottish Clans

Founded in 1982, Nevada Society of Scottish Clans celebrates their rich Caledonian history and cultural heritage.  The Society is based in northern Nevada and serves a membership of over three hundred people in northern Nevada and northern California.  Membership is not limited to the Scots, but includes all who have an interest in the culture and heritage of Scotland.

In addition to informative and entertaining gatherings, the Society promotes Scottish heritage through their annual dinner honoring the memory of Scotland’s beloved national poet, Robert Burns, Tartan Day, participation in Reno’s Celtic Celebration, a Kirkin’ of the Tartans, a summer picnic, Tartan Golf and a holiday gathering.

To receive additional information or have questions answered regarding Nevada Society of Scottish Clans please email: info@nvssc.org or call and leave a message on the NSSC information line:775-345-3435.

Alms-Giving Abounds at Rounds Bakery
Local restaurant gives back to the community in more ways than one
Rounds Bakery - May 31, 2019

Local Bakery Releases Game of Thrones-Themed Donuts
The time of the dragons is upon us, and the donuts are coming!
Rounds Bakery - Apr 9, 2019