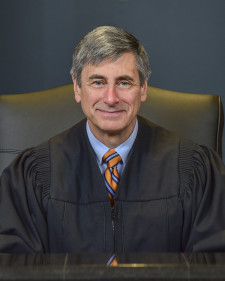 ST. LOUIS, July 21, 2021 (Newswire.com) - The National Council of Juvenile and Family Court Judges (NCJFCJ) announced Judge David D. King of the New Hampshire Circuit Court as the Innovator of the Year Award recipient during the seventh-annual Justice Innovation Awards ceremony at the NCJFCJ's 84th Annual Conference. Judge King was recognized for his work and efforts to innovatively rethink, reimagine, and redefine justice for children and families, thus advancing the NCJFCJ's vision—a society in which every family and child has access to fair, equal, effective, and timely justice.

The Innovator of the Year Award honors an active, in-good-standing NCJFCJ member who has inspired, sponsored, promoted or led an innovation or accomplishment of national significance in juvenile justice, child abuse and neglect, family law, and/or domestic violence.

"Judge King has been instrumental in reimagining New Hampshire's courts into one integrated circuit court which includes a family division that allows judges to specialize in the unique needs families present in court," said Judge Hiram Puig-Lugo, NCJFCJ president. "We applaud him for his progressive thinking to help keep families together and improve children's lives in the face of the pandemic, reorganization of staff and processes, and state budget cuts."

Judge King was instrumental in the formation of a court division devoted to family and juvenile justice issues, which include child protection, domestic violence, domestic relations, child support, delinquency, guardianships, termination of parental rights, and adoption. Through his leadership, all family judges in the New Hampshire Circuit Court became NCJFCJ members to become better judges through training, technical assistance, and judicial education. The creation of the Family Division enables a single judge to hear all cases affecting a single family.

Judge King established a central call center to streamline communications with helpful and knowledgeable staff. He and his team brought electronic filing to cases in the state, which included the centralization of probate filings and guardianships to an online process. During COVID-19, he and his staff worked with the Statewide Coalition Against Domestic and Sexual Violence with a new system to file e-petitions for protective orders with the help of an advocate. Judge King designed and implemented the technology systems needed for the continuation of pleadings and hearings during the crisis with limited resources. Judge King oversaw the expansion of Alternative Dispute Resolution to small claims cases with a 95% settlement rate during the pandemic.

"All of these innovations have allowed judges and court professionals to service the complex needs of children and families in New Hampshire," said Judge Susan B. Carbon of the 9th Circuit Court Family Division in Manchester and NCJFCJ past-president. "That figure of innovation is Judge King. It is a testament to his leadership that access to justice has prevailed in the face of this daunting crisis. I, alongside with my colleagues, believe that he is a champion and visionary for children and families. He has been instrumental in implementing many positive changes in the New Hampshire court system."