The FlipShot Shot Glass Eliminates the Burn With Inspired Innovation

The team behind the 'FLIPSHOT: Shot Drinking That Makes Sense' project on Kickstarter plans to bring an innovative new shot glass to market. 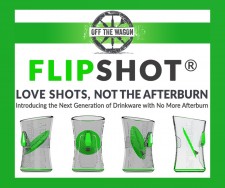 New York City, New York, September 29, 2016 (Newswire.com) - ​Joshua Civelli and Derek Ogden, the two founders of U.S. based start-up Off the Wagon LLC, have launched a crowdfunding campaign on Kickstarter. This campaign has a funding goal of $20,000, which needs to be raised in order to bring their flagship product “FlipShot” to market. FlipShot® is a unique, dual-chambered shot glass that enables consumers to drink a shot of liquor and immediately chase it with a second beverage in order to get rid of that infamous hard liquor “burn”. The team states, “While some crave that challenge of a burning throat and intense taste, most of us just want to drink the shot and let the good times roll. With FlipShot you can imagine that smooth aftertaste of the chaser and not your ridiculous face after a liquor only shot, so you can get back to being the life of the party!”

The team at Off the Wagon wanted to create a product that would allow people to have a great time at a party or outing, without becoming the star in that infamous “after-the-burn face” photo. The peak burning sensation usually occurs within 1 - 4 seconds after swallowing a shot of liquor. So the team put their heads together and came up with a way to stop the burn before it starts.  FlipShot, the result of mechanical engineering, physics, and ingenuity, delivers the chaser 1/3 of a second after consuming the shot, which means the major burning sensation is stopped before it begins. To use, simply put the chaser in first, push the button to move the chaser to the bottom chamber, pour in the liquor of choice. Now drink the shot, then push the button and drink the chaser.

"FlipShot offers the perfect solution to the bad taste and burning sensation of many liquors. Now you can return to being the life of the party and enjoy the drinking experience!"

Since the team would settle for nothing less than excellence, the final FlipShot design is the culmination of 112 prototypes that led to both major and minor design changes. It is made out of a high-grade glass-like plastic called Tritan, and will be BPA and BPS free, as well as dishwasher safe and durable. While it was originally created for the bar scene, the design is so ingenious that it can be used for several other purposes as well. Imagine being able to get a child to take their medication without complaint. They can take their medicine and then immediately chase it with their drink of choice. It can even be turned into a fun game, which makes a parent’s life easier.

The team at Off the Wagon has been working very diligently on all of the essential groundwork for FlipShot and they are now ready to begin the process of bringing the shot glass to market which is why they have launched their Kickstarter campaign, and hired a team of crowdfunding specialists to help them spread the word. As an added bonus with this campaign, the team is offering supporters the opportunity to pre-order FlipShot from a single shot glass to various specialized multi-packs at a substantial savings off of regular retail pricing. The team expects to begin manufacturing during December 2016, with a projected delivery date of February 2017. Full details can be found on their Kickstarter campaign page.

About Off the Wagon LLC:

Off the Wagon LLC is an American drinkware design firm that was founded by good friends Joshua Civelli & Derek Ogden. It consists of a talented group of engineers and multimedia specialists who came together with a shared vision to discover new ways for everyone to better enjoy social gatherings; from parties, to nights out on the town, in the hopes of increasing the number of “Unforgettable Nights”.

For more information about Off the Wagon LLC Click Here

To learn more about the FlipShot crowdfunding project Click Here

To contact via email write to Derek Ogden at: derek@offthewagondrinkware.com

Source: Off the Wagon LLC