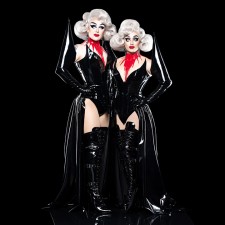 LOS ANGELES, August 7, 2019 (Newswire.com) - ​The hit underground show The Boulet Brothers Dragula is making the jump from web series to one of the world’s largest streaming platforms for the third season of the show. The highly anticipated new season will launch exclusively on Amazon Prime Video in the United States and 63 countries around the world. The show will also air on cable channels OutTv in Canada and TVNZ in New Zealand.

This season of the show will break new ground by being the first drag reality competition show to feature both a “Drag King” and a female drag artist competing on a reality series in North America.

The show is hosted by modern-day horror hosts the Boulet Brothers who will be joined by a rotating panel of celebrity guest judges from the worlds of horror and music. These guest judges include Henry Rollins (Black Flag), Bonnie Aarons (The Nun), Millie Shapiro (Hereditary), Rachel True (The Craft), Danielle Harris (Halloween 4, 5), Felissa Rose (Sleepaway Camp) and Darren Stein (Jawbreaker), along with surprise guest judges featuring queer icons and nightlife legends to be revealed during the season.

The Boulet Brothers Dragula is a drag competition show that features 11 monster drag artists from around the world competing to win a $25,000.00 grand prize, the crown and the title of Dragula – the world’s next drag supermonster. Each episode the competitors are given challenges to prove their skills at costume design, special effects makeup, acting, and performance art. The weakest monsters of each episode must face extreme fear-based challenges to prove they deserve to remain in the competition or they will face extermination. From being buried alive to eating maggots, jumping out of a plane or getting tattooed, the extermination challenges are thrilling, shocking and truly must-see tv.

The Boulet Brothers Dragula also shines a light on a corner of queer life that is rarely depicted on television, including the harsh reality some gay men, lesbians, and trans people face while living and performing as underground queer artists in their respective communities.

"The Boulet Brothers’ Dragula is different, dramatic and daring. The Boulet Brothers have created a series that is unlike anything viewers have seen before and we are thrilled to be working with them on a new season of the show.” - Brad Danks, CEO of OUTtv Network.

For publicity photos of the cast and hosts visit us at:
https://www.dropbox.com/sh/sufpjm225b6lme5/AACnenOFRmaVaqB1dV7WJdMoa?dl=0