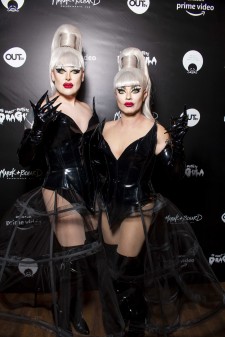 The show is taking both queer and horror audiences by storm, as the third season of the series broke viewer records all over the world. After trending on Amazon Prime for several weeks, it was the #1 purchased reality show on iTunes in the U.S. & U.K. for several weeks in September, and accounted for the top five viewed shows on OUTtv overall, outperforming the previous season by 196%.

The show is created and hosted by drag horror icons the Boulet Brothers who (each season) challenge eleven drag artists from around the world to compete in a wild, no holds barred drag competition to win $25,000.00 and the crown of Dragula - the World’s Next Drag Supermonster. The show has the cast competing in all things required of a drag superstar – costume creation, special effects makeup, live performance and acting abilities, but it also takes these traditional challenges one step further. For the contestants who end up on the bottom each week, they must face terrifying and gruesome physical and mental challenges to prove they have the guts and glamour to remain in the competition. From jumping out of airplanes to eating live spiders, getting terrible tattoos and taking lie detector tests, the show presents drag in a way that has never been seen on television before and audiences can’t get enough.

Netflix and Boulet Brothers Productions announced the show’s move to Netflix on Halloween night at midnight, ushering in a new audience and era for the show.

The following day Fangoria Magazine dubbed The Boulet Brothers’ Dragula “Required Horror Viewing,” adding “Nothing about Dragula feels safe, and that’s because it’s a reminder that much like horror, drag is as political and unsafe as it gets.‍”

Billboard Magazine added “The Boulet Brothers already made history with the casting of the latest season of their competition reality series Dragula when they cast Landon Cider,” adding “now they're making history again by crowning him the winner.”