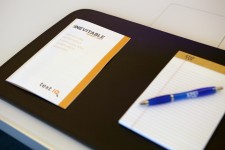 NEW YORK, September 8, 2017 (Newswire.com) - Text IQ is a cutting-edge technology company that harnesses the power of Artificial Intelligence (AI) and people to prevent legal and compliance disasters across industry sectors. The company recently launched The Inevitable, an invite-only summit, that was attended by Fortune 100 executives and leading researchers to discuss AI’s evolving role in protecting highly-regulated enterprises. The announcement was made by Apoorv Agarwal, the company’s Co-Founder and CEO.

"AI is inevitably and fundamentally changing the way businesses function," stated Dr. Agarwal. "The Inevitable was born out of the understanding that when humans and machines work together, they work better. Artificial intelligence is improving daily, allowing legal, compliance, and executive teams to make sophisticated, extraordinary leaps forward in legal and compliance disaster prevention," added Agarwal.

“Despite an array of computer-assisted tools companies today still must hire armies of human reviewers to weed through minute details found in millions of digital files,” said Randy Milch, former General Counsel of Verizon Communications, who attended The Inevitable. "Text IQ  brings the power of AI to the difficult legal and compliance issues of big organizations. Moreover, Text IQ’s founders are committed to the responsible implementation of AI the legal and compliance arena," continued Milch.

Omar Haroun, the company’s Co-Founder and COO stated, "Today’s summit highlighted a lot of important challenges that our society is facing, which wouldn’t be possible to solve without the leaders in this room coming together to have an open, honest discussion about the very real future that is quickly approaching."

Haroun continued, "The Inevitable is about something much bigger than Text IQ, and we are looking forward to continuing the discussion at The Inevitable 2.0 in 2018. This is only the beginning."

To request an invite for The Inevitable 2.0 visit TheInevitable.ai.

Text IQ is a cutting-edge technology company that harnesses the power of AI and people to prevent legal and compliance disasters.  The company was founded in 2014 by Dr. Apoorv Agarwal and Omar Haroun.  The company has multiple patents pending and its investors include top venture capital firms like Floodgate, Pathbreaker Ventures, and Fortune 500 executives. Text IQ’s customers include Fortune 200 companies, government agencies, tech giants and highly regulated enterprises in health care, biotech, energy, gaming, insurance, and finance. Text IQ hosts its invite only summit, The Inevitable, to bring together industry leaders to encourage debate and connect thinkers with doers to facilitate leaps forward in legal and compliance disaster prevention.

Visit us at TextIQ.com and follow us on LinkedIn at https://www.linkedin.com/company/textiq

Dr. Agarwal is an expert in Machine Learning (ML) and Natural Language Processing (NLP), who is dedicated to understanding and improving how humans and machines benefit from working together. In 2014, he was awarded a grant from the National Science Foundation’s Innovation Corps program, which allowed him to lay the foundation for Text IQ. Prior to Text IQ, Dr. Agarwal received the IBM Ph.D. Fellowship award in recognition of his work as the first author on two separate patents for IBM’s Watson. He received his M.S. and Ph.D. in Computer Science from Columbia University. Dr. Agarwal has published more than 30 academic papers in ML and NLP. His work, which focuses on sentiment analysis, relation extraction, text summarization, and automated Q&A, has received more than 1000 citations across the international research community. Beyond academia, he has been cited by American Banker, WIRED, Popular Science, New Scientist, and Science Magazine, among others.

Haroun is a successful entrepreneur and operator that has a passion for merging ideas, technology, and people together. Haroun began his career at Orrick, Herrington & Sutcliffe, LLP and Wilson Sonsini Goodrich & Rosati PC before assuming operational roles at high-growth startups including Sportaneous, an award-winning health tech startup where Haroun served as founder and CEO, and which was acquired by Greatist in 2013, and Greatist, where he grew the company’s reach to more than 10 million unique visitors per month. Haroun also served as Managing Partner of Oxford Digital, a boutique digital agency that helped corporations market innovative products. Haroun received his J.D. and M.B.A from Columbia University, where he received the William J. Heffernan Memorial Award for Service, and an MA from Oxford University. He has been honored by the White House as a Champion of Change.

Text IQ Recognized as One of World's Top 5 AI Companies in Risk & Regulatory Compliance
The company was joined by WorkFusion, Socure, Onfido and Merlon Intelligence in receiving the honor
Text IQ - Dec 15, 2017

Text IQ Named One of the World's 100 Most Promising AI Companies
The startup was named to the 2018 AI 100, highlighting advancements in artificial intelligence.
Text IQ - Dec 14, 2017