TLC Creative provided technical production services, staging, and more, to Santa Monica's first gay pride festival; Pride on the Promenade. TLC provided the event festival staging, lighting and special effects, plus the audio and visual support. The main stage included a large video display, as well as a wireless audio system that played back concert audio for 3 blocks of the Promenade mall. TLC also lit up Xylobands for a special moment at the event.

The outdoor festival concert staging and audio/visual was quickly set up, and the event filled Downtown Santa Monica with people, music and energy. The festival featured numerous performing artists, and popular DJs. The Abby's DJ Brynn Taylor, and many other DJs, got the entire event dancing and celebrating.

The main stage included a large video display, as well as a sophisticated wireless audio system that played concert audio (wirelessly) for 3 long blocks of the Promenade mall.

TLC was proud to provide Santa Monica's first gay pride festival with the production support and included LED tubes to light up the stage edges with RGB light effects.

DTSM PRIDE on the PROMENADE >

Singer/Songwriter Stephanie Rice was a featured performer at the event. Rice reached across America on season 12 of NBC's The Voice—later emerging as a top 11 finalist, and beginning her ascent as a pop artist of extraordinary impact. Now based in L.A., Rice has recently teamed up with in-demand songwriters like Justin Tranter (Janelle Monáe, Imagine Dragons, Kacey Musgraves, Julia Michaels) to bring her sophomore effort to life.

TLC creates customized special effects and reveals, kabuki drops, pull-aways, and screen drops, including the 360-degree video projection mapping for the pre-game shows at the Staples Center for the Los Angeles Lakers. 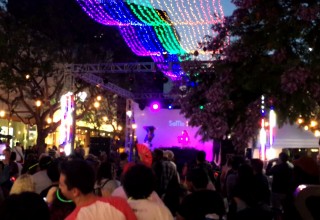 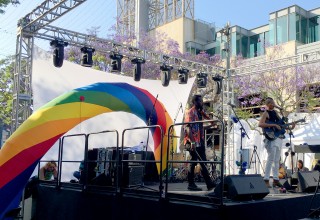 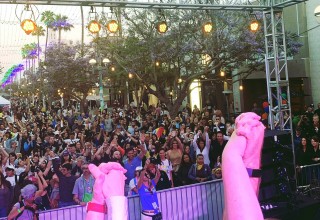 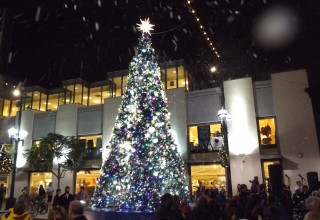 ​A Maze of LED Light Creates an Event Entrance Experience by TLC Creative Technology
Special event entrances can be themed into unique experiences, like a walk-through maze that created a 'chaos' of twisted light that guests had to navigate to enter an event. Like the lasers in a scene from Mission Impossible, the creative use of LED tubes made guests duck and move through the maze of light. LED light effects are becoming a powerful way to create unlimited experiences for special events.
TLC Creative Technology - Jan 14, 2020