TDG: Binge Viewing is Pervasive, Though Age Plays a Key Role in Frequency 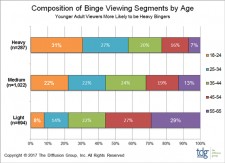 PLANO, Texas, August 9, 2017 (Newswire.com) - According to new research from The Diffusion Group (TDG), binge viewing — that is, viewing more than one episode of a TV series back to back — is rapidly becoming universal, with nearly nine-in-ten ABUs binging at least occasionally. But the frequency of binge viewing skews strongly in favor of younger adults. These insights are from TDG's latest report, Binge Viewing - A Consumer Snapshot.

Importantly, TDG analysts found that the frequency of binging is strongly correlated with the viewer's age. For example, 58 percent of Heavy Bingers are between the ages of 18 and 34, while 56 percent of Light/Non-Bingers are age 45 and older.

"The fact that 31 percent of Heavy Bingers are between the ages of 18 and 34 further illustrates just how different millennial viewing habits are from those of older generations," notes Michael Greeson, President and Principal Analyst at TDG. "For more than a decade, TDG has predicted and observed a structural transformation in what it means to 'watch TV,' with viewing behavior slowly changing from an activity defined by flipping between different live shows on different networks, to one characterized by on-demand binging of individual series."

As these consumers age and younger generations steeped in quantum habits follow behind them, Greeson argues that this behavior will only become more prominent, further impacting programming and distribution strategies.

TDG's latest analysis of contemporary viewing behavior, Binge Viewing - A Consumer Snapshot offers deep insight into the different segments of binge viewers — who they are, how they behave, and what drives their decisions and preferences. For more information about this new report, please contact sales@tdgresearch.com or call 469-287-8050.

About TDG Research
TDG provides actionable intelligence on the quantum shifts impacting consumer technology and media behavior. Since 2004, we've helpedleading and emerging technology vendors, media companies, and service providers master the digital transformation and decipher how modern viewers access and engage video-whenever and wherever they may be. Learn more about how we can help improve your digital video strategies.