Join Mayor Harry Dressler for the State of the City address, in which insights and perspectives on 2017 and the City's vision for the future will be shared. The address falls on Valentine's Day this year giving residents more reasons than ever to love Tamarac. The speech will open the regular City Commission meeting. 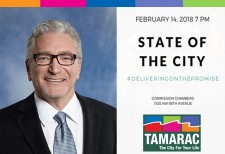 TAMARAC, Fla., February 8, 2018 (Newswire.com) - At his February 14, 2018, State of the City presentation, Tamarac Mayor Harry Dressler will share insights and perspective on 2017, as well as the steps in place to ensure a solid future for the City. The State of the City address will take place in the Commission Chambers, 7525 NW. 88th Avenue and will open the 7 p.m. Commission meeting. Residents are welcome to attend or watch live or on demand through the City’s website.

Keyed to the theme “delivering on the promise”, Mayor Dressler will recap an extremely successful year for Tamarac including the opening of Millennium 6-12 Collegiate Academy, the opening of a new fire station to better serve the eastern portion of the City – adorned with a significant sculpture by renowned artist Albert Paley - and the addition of decorative walls and entry signage that showcase Tamarac’s vibrancy.

With sound financials, Tamarac is able to devote resources to optimizing City services. The momentum continues to build and we're delivering on our commitment to the people of Tamarac.

Looking toward the future, Mayor Dressler will provide an update on the metamorphosis that is taking place on the site of the City-owned Colony West Golf Club, with a new clubhouse as well as a new Marriott hotel. He’ll also discuss a very significant piece of the City’s future: Tamarac Village. This combination of residential and retail development will become the City’s downtown. 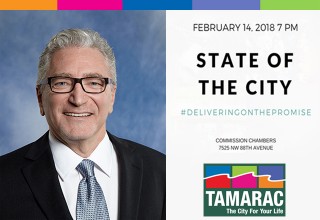 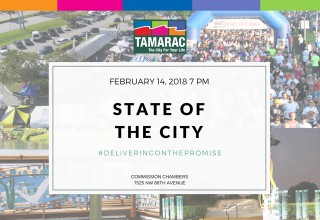