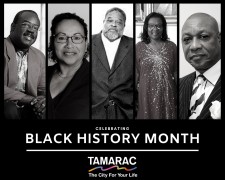 Tamarac, Florida, February 9, 2019 (Newswire.com) - Tamarac will celebrate Black History Month by recognizing five individuals for their contributions to the community at a City Commission Meeting at 7 pm on Wednesday, February 13. A special reception will be held in their honor prior to the meeting.

Sandra Bernard-Bastien. Bastien is Chief Communications Officer of the Children’s Services Council of Broward County. She has also held leadership roles on the South Florida Hunger Coalition and Broward Immigration Coalition, and served as President of Partners in Education. She is a Board Member Emerita of 211 Broward, and a founding Board Member of the Florida Prosperity Partnership. She co-authored several books including “Caribbean American Heritage: A History of High Achievers” with her husband, Elliot Bastien.

Debbie-Ann Flynn. Flynn is a medical professional who serves as a Registered Surgical Technologist at Memorial Regional Hospital and teaches CPR for the American Heart Association. She is an active member of the Eliathah Seventh-Day Adventist Church, where she serves as the Superintendent of the Lower Division in the Sabbath School Department, providing services such as the delivery of food and clothing to the needy community in Tamarac and Fort Lauderdale.

George Gadson. Tamarac’s Public Art Administrator, Gadson is considered one of Florida’s most versatile and celebrated African American artists with large scale works of public art displayed in several South Florida communities. A recipient of the NBC Channel 6 Spirit Award of South Florida and the Jim Moran Foundation Award, Gadson is also the founder of Art-Turnatives for Building Communities, Inc., a non-profit that provides art experiences for children and adults in lower income neighborhoods.

Rev. Dr. Dennis D. Grant. The Rev. Dr. Grant has founded several institutions to help those in need, including the A Place of Restoration ministry known for its outreach to those in distress, where he served until his retirement in 2013. He is also the founder and executive director of the Juvenile Restoration Council, a crisis intervention and comprehensive counseling program for at-risk youth and their fractured families. In the faith community, he founded Pastors Guild of America, which exhorts the church community to make their institutions beacons of hope in beleaguered neighborhoods.

“We’re proud to recognize these distinguished individuals as we join communities across the country in celebrating Black History Month,” said Tamarac Mayor Michelle J. Gomez. “Their contributions to the South Florida community, and their leadership, are truly inspiring.”

Tamarac Commission Meetings are open to the public and held in the Commission Chambers of Tamarac City Hall at 7525 NW 88th Avenue. They are live streamed on www.Tamarac.org and available to watch On Demand, typically within 24 hours of the meeting.

ABOUT THE CITY OF TAMARAC

Tamarac covers a 12-square mile area in western Broward County and is home to more than 65,000 residents and approximately 2,000 businesses. Ideally situated, Tamarac provides easy access to highways, railways, airports and waterways, and a wealth of cultural and sports activities. Tamarac’s median age continues to grow younger and the population more diverse, as people recognize the City as a great place to spend their lives. For more information visit www.Tamarac.org or contact Elise Boston at (954) 597-3523 (Elise.Boston@Tamarac.org) or Sue Siebert at (954) 597-3518 (Sue.Siebert@Tamarac.org) at the City of Tamarac's Public Information Office. ​