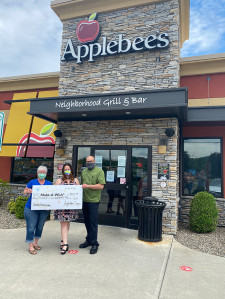 BUFFALO, N.Y., February 18, 2022 (Newswire.com) - T.L. Cannon Companies, local franchisee, and owner/operator of 58 Applebee's Grill + Bar locations in Upstate New York, Connecticut and Sayre, Pennsylvania, is proud to announce that they raised $116,623 for their local Make-A-Wish chapters in 2021. This donation brings T.L. Cannon's total contributions to Make-A-Wish to more than $1.8 million since the start of their partnership in 2008.

The Make-A-Wish Foundation of America is a non-profit organization that grants life-changing wishes to children who are battling critical illnesses. The foundation has local chapters across the United States, helping children (and their families) find a glimmer of hope during hard times.

T.L. Cannon partners with seven local Make-A-Wish chapters throughout their operating areas. This partnership connects them deeper within their communities, as they make an impact on families right in their neighborhoods.

"Having the opportunity to make a difference in the lives of our neighbors is a humbling experience," said Matt Fairbairn, CEO, T.L. Cannon Companies. "You don't realize just how 'close to home' Make-A-Wish is until you have a child and their family dining in your restaurant, learning that their wish is being granted. This has always been our primary focus: to serve our communities and be an integrated part of the neighborhood."

Each year, these Applebee's locations host three large fundraisers for local Make-A-Wish chapters—a Holiday Fundraiser, a Spring Fundraiser, and a Summer Golf Tournament. In addition to the annual fundraisers, locations initiate basket raffles, donate food, participate in walks, and more. Finally, and perhaps one of the most rewarding aspects of the partnership, Applebee's locations welcome families to dine at their local restaurant for "wish dinners" with Make-A-Wish volunteers. At the dinners, children can share what their wish would be, find out their wish is being granted or share details of their time with volunteers after experiencing their wish.

Participating T.L. Cannon Applebee's locations include those in Upstate New York, Connecticut and Sayre, Pennsylvania. For a full list of locations and their addresses, please visit: tlcannon.com/locations/.

T.L. Cannon Companies is a private owner/operator of 58 Applebee's Neighborhood Grill & Bar restaurants in Upstate New York, Connecticut and Sayre, Pennsylvania. In 2021, the company raised over $116,600 for their local Make-A-Wish chapters, in addition to supporting over 67 groups with their Carryout for a Cause program. For the past 13 consecutive years, the company was awarded the New York State Restaurant Association's "Restaurant Neighbor Award" for their community-based programs. In 2015, T.L. Cannon was recognized at the national level for the industry with the National Restaurant Association's "Restaurant Neighbor Award" for their support of the community. Visit tlcneighborhood.com to view other community involvement initiatives.

As one of the world's largest casual dining brands, Applebee's Neighborhood Grill + Bar serves as America's kitchen table, offering guests a lively dining experience that combines simple, craveable American fare with classic drinks and local drafts.  Applebee's restaurants are owned and operated by entrepreneurs dedicated to more than serving great food, but also building up the communities that we call home. From raising money for local charities to hosting community fundraisers, Applebee's is always Doin' Good in the Neighborhood®. Applebee's franchise and company-operated operations consisted of 1,689 Applebee's restaurants in the United States, two U.S. territories and 11 countries outside the United States as of September 30, 2021.

Local Applebee's Franchisee, T.L. Cannon Companies, Provides More Than $1.6M in Support in 2019; Over $24.5M Since 2008
Recognized both nationally and at the state level for its community support and involvement, the company believes in 'neighborhood first'
T.L. Cannon Companies - Jan 29, 2020