Recognized both nationally and at the state level for its community support and involvement, the company believes in 'neighborhood first' 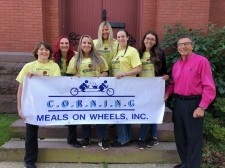 BUFFALO, N.Y., January 29, 2020 (Newswire.com) - T.L. Cannon Companies, local franchisee and owner/operator of 60 Applebee’s Neighborhood Grill + Bar restaurants in Upstate New York, Connecticut, and Sayre, Pennsylvania, announced today that they provided more than $1.6 million in support of local charities and organizations in 2019 alone — and over $24.5 million since 2008.

“While Applebee’s is a national brand,” said Stephanie Griffin, Director of Marketing and Public Relations, T.L. Cannon Companies, “we are a locally owned and operated franchise that supports organizations in need, right here in our communities. Our team members are proud to be a part of something bigger; they embrace being able to help others.”

Each year, the T.L. Cannon team works with their local Make-a-Wish and Special Olympics chapters, making dreams come true for local children and young adults. In addition, all 60 locations work with local schools and youth organizations through student recognition and fundraising programs, such as the popular “Flapjack Fundraisers,” and local not-for-profits are supported through their Dining to Donate program. The company’s annual “National Good Neighbor Day” celebration puts the focus on team members getting out in the community and volunteering time and talents. This one-day celebration raised over $14,000 for donation, included over 500 restaurant volunteers, nearly 2,000 volunteer hours were served and over 2,000 items were collected.  And finally, current and former members of the military hold a special place in the hearts of everyone at T.L. Cannon – they are honored annually with a complimentary meal on Veteran’s Day as well as a “Military Appreciation Month” celebration every May.

T.L. Cannon's efforts certainly have not gone unnoticed. The franchise has been awarded the National Restaurant Association’s yearly “Restaurant Neighbor Award” for New York State — 13 times. In the Applebee’s system of close to 40 owner/operators, the franchise was also recently awarded the 2018 “Lloyd Hill Neighbor of the Year” and has been the recipient of this same award five other times since 2008.

Both of these awards are presented to restaurant groups and their team members who are actively devoted to providing support to their community throughout the year and for T.L. Cannon, their commitment to the community and being a part of the neighborhood is a core part of their culture.

“Receiving this recognition from the National Restaurant Association and Applebee’s is a testament to the commitment to service that’s evident throughout our teams at T.L. Cannon,” said Matt Fairbairn, CEO, T.L. Cannon Companies. “We are passionate about the work we do throughout our communities and are dedicated to staying true to our namesake — your Neighborhood Grill + Bar.”

For a market breakdown, questions or to be included in future press releases and media alerts for Applebee’s/T.L. Cannon, please email Kaitlyn Czerwonka: kczerwonka@tlcannon.com.​