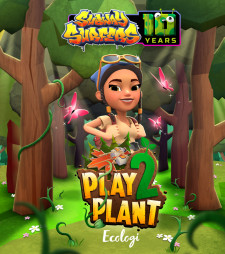 COPENHAGEN, Denmark, November 5, 2021 (Newswire.com) - As World leaders meet in Glasgow for the UN Climate Change Conference UK 2021, SYBO Games announces it has partnered with Ecologi to plant 200,000 trees amid the global climate crisis. An active Subway Surfers gamer base will Play 2 Plant as they run during the Vancouver update this month, and propel SYBO's real-life donation to help our planet by planting trees in forests across the globe. And, as the Subway Surfers worldwide community powers SYBO's commitment to sustainability, they will also experience a related in-game simulated virtual environment as they plant trees and green their worlds.

"As U.S. President Biden said this week, 'We know what to do, we just have to do it,' and at SYBO, we are doing it with Play 2 Plant," said CEO Mathias Gredal Nørvig, SYBO Chief Executive Officer. "We have the opportunity to spread important messaging about steps we can all take together to help our planet and move towards a more sustainable ecosystem. We are running at this crisis together with our players."

Ecologi is a global social enterprise dedicated to positive climate solutions. Through its tree-planting partners like SYBO and others, Ecologi can responsibly plant millions of trees a month.

Beginning November 4 through November 21, players can choose the Play 2 Plant event in Subway Surfers: Vancouver, select their hoverboard and run. During the event, the users will be running in a faded version of New York, and they will need to use hoverboards in order to bring the environment back to life. The city will become greener as the players unlock challenge milestones while running on their selected hoverboard. The Ecologi Subway Forest illustrates in real-time the type of tree species planted, its age, where and by who. SYBO will keep players updated on Subway Forest milestones via in-game mailbox messages to all players and showcased on Subway Surfers social media.

SYBO holds a deep commitment to sustainability and Play 2 Plant is the latest activation leading to Subway Surfers' 10th-anniversary celebration in June 2022.

The partnership with Ecologi further demonstrates SYBO's commitment to executing on the Company's core values, including sustainability, inclusivity, diversity and kindness. Earlier this year, SYBO launched updated pronouns in the game and in September, SYBO partnered with Born This Way Foundation, a nonprofit organization co-founded by Lady Gaga and her mother Cynthia Germanotta, as part of their #BeKind21 campaign with a multi-pronged campaign centered on mental health and kindness.

SYBO takes its commitment to sustainability seriously. In 2019, SYBO was among the two dozen companies taking the Play for the Planet pledge, committed to actively using their platforms to inform, nudge and take meaningful action in the fight against climate change, and SYBO invests in projects and companies working for a green transition, such as AIC in Chile, which develops water purification technology; Boston-based Clover, which produces sustainable fast food; and the London-based green investment fund Impax. SYBO annually purchases 200 tons of CO2 allowances to offset office and travel activities by 200%. SYBO has also installed solar panels on the roof of its office building in Copenhagen, which meets the majority of the facility's power needs.

Subway Surfers topped 2019's most downloaded mobile game in the world, with more than 3 billion downloads to date. To find out more, please visit www.sybo.com.

Ecologi is a platform for real climate action. They facilitate the funding of carbon reduction projects and tree planting around the world. To date, Ecologi has planted over 24 million trees and funded climate solution projects that have reduced over 800,000 tonnes of CO2. Its mission is to reduce 50% of global CO2 emissions by 2040 and responsibly plant billions of trees every year.

To do this, Ecologi calls on individuals & businesses to take personal responsibility and help tackle the biggest threat of our generation. Collectively, with a little input from a lot of people, we have the power to secure our future.

To find out more, visit: https://ecologi.com/