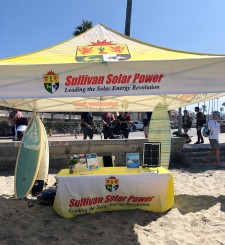 “The production and use of renewable energy sources, such as solar, is a way to curb emissions and slow climate change,” said Michael Torti, Executive Committee Chair of Surfrider Foundation San Diego Chapter, “Our team is proud to announce Sullivan Solar Power, a San Diego solar company, as a partner of supporting Surfrider San Diego Chapter's efforts to protect our communities’ ocean, waves, and beaches.”

“Partnering with Surfrider Foundation San Diego is a natural fit - reducing our fossil fuel consumption locally will have a positive impact on the ocean and on our beaches,” said Daniel Sullivan, founder and President of Sullivan Solar Power, “Through this partnership, our donations will allow Surfrider Foundation, San Diego, to further their great work in the community while helping families save money and reduce their carbon footprint.”

As a leader in coastal preservation, Surfrider Foundation aims to prevent further drastic changes to our ocean, waves, and beaches by advocating for an overall reduction in greenhouse gas emissions. Going solar is one of the easiest ways San Diegans can take charge and reduce their carbon footprint.

To learn more about the solar program or to RSVP for the next event, visit www.surfridersolarprogram.org.

Sullivan Solar Power is a turnkey solar system provider that delivers solar electric projects from concept to completion. The company has installed more than 7,500 systems and 70,000,000 watts of solar power ranging from small-scale residential to large-scale commercial and municipal systems. Sullivan Solar Power was founded by Daniel Sullivan in 2004. The firm has been named one of the fastest growing energy companies in the nation by Inc. Magazine and services all of Southern California. Sullivan Solar Power was voted San Diego Union Tribune’s Best Solar Power Company and remains the only San Diego company to be nationally accredited. The company is a top developer for energy storage in the state. Regardless of project size and scope, Sullivan is committed to delivering the best products and the most qualified professionals to its customers. Visit www.sullivansolarpower.com or call 1.800.SULLIVAN for more information.