Legal Printer Supreme Court Press awards the Petition of the Month (TM), which recognizes excellence in legal theory and writing, to Richard Loccke, Laruen Sandy, Michael Bukosky, and Leon Savetsky of Loccke Correia and Bukosky Law Firm. The Petition analyzes the theory behind the Federal Contracts clause and how it applies to the under-funding of New Jersey State Trooper pensions. 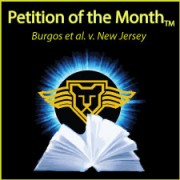 Washington D.C., February 25, 2016 (Newswire.com) - ​​Certiorari and amicus brief printer Supreme Court Press has named Christopher Burgos et al. v. State of New Jersey, Supreme Court Docket No. 15-293, to be its Petition of the Month(TM). According to the petition filed by Richard Loccke, Lauren Sandy, Michael Bukosky, and Leon Savetsky of the law firm Loccke, Correia, and Bukosky.  This is a petition involving the highest of stakes, billions of dollars of pension fund contributions due from the State of New Jersey to the New Jersey State Troopers’ pensions.

According to the petition, the New Jersey legislature enacted laws that increased both State and employee contributions for a period of seven years in order to restore the pension system to a fiscally sound level, with the language of the law stating that these pension contributions were contractual obligations of the State and containing a waiver of the State’s ability to claim sovereign immunity. As New Jersey’s budget became strained, Governor Chris Christie eliminated the increased state pension contributions, while leaving the increased employee contributions in place.  The New Jersey State Troopers were victorious in the trial court which ordered the state to fund the pensions, but its decision was overturned by the New Jersey Supreme Court which held the New Jersey Constitution prevented the state from entering into contracts which, when not funded, were unenforceable.

The State clearly wants to bind State Troopers and other public employees to these increased contributions while evading its statutory and contractual obligation to contribute any money to the unfunded liability. The State drafted this legislation. -

According to Lauren Sandy in the award winning petition, “The New Jersey Supreme Court evaded review under the Federal Constitution... Many of the highest Courts of final resort in the Country have recognized that a mere failure to fund is not a justification to avoid a Federal Contract Clause analysis and centuries of precedent have held similarly.” Ms. Sandy also discusses the unfairness of the outcome from the decision. “The State clearly wants to bind State Troopers and other public employees to these increased contributions while evading its statutory and contractual obligation to contribute any money to the unfunded liability. The State drafted this legislation.  The Governor paraded around the State championing himself on fixing the fiscal integrity of the pension systems and then line item vetoes a $1.57 billion contribution.”

Attorney Lauren Sandy worked closely with the Supreme Court Press editor in the preparation of the petition, and offered these high complements, “I felt the (Supreme Court Press) editor process was amazing and I wish I could hire Supreme Court Press for all of my briefs.  ... With regard to the initial brief I felt that the help I received was way more than I expected...  The other unions in this matter collaborated and filed a joint petition, their petition did not have the same level of professionalism and it did not look as polished as the one we submitted on behalf of the New Jersey State Troopers.”

To read more about the interview with Lauren Sandy, follow this link:

The Supreme Court Press specializes in the affordable preparation, printing, and filing of legal briefs in compliance with the rules of the United States Supreme Court.

Supreme Court Press Awards Petition of the Month to the Boyd W. Gentry
Legal Printer Supreme Court Press awards the Petition of the Month (TM), which recognizes excellence in legal theory and writing, to Boyd Gentry of the Law Office of Boyd W. Gentry. The Petition, which is now a Merits Case scheduled for oral argument, analyzes an unusual conundrum, where an attorney hired by the Ohio Attorney General, is sued under the Fair Debt Collections Practices Act for following the specific instructions of the Ohio AG and the Ohio statutes.
Supreme Court Press - Mar 24, 2016
Newswire