Successful Expansion of 'Musio,' an AI Educational Social Robot, Into the Korean Market 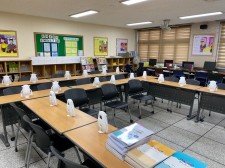 SANTA MONICA, Calif., April 21, 2020 (Newswire.com) - AKA (CEO Raymond Jung), the developer behind AI educational social robot Musio, completed distribution and installation of Musio to Jeju Mureung Innovation Elementary and Middle School (Principal Hee-sun Kim), showing its successful entry into the Korea Market. Starting with the innovation school category (so-called Hyuck Shin Schools) that the Ministry of Education has established in Jeju, the company plans to expand language education services using its AI education solution and robot nationwide by working with collaborative projects with the Central Education Training Center under the Ministry of Education of Korea.

“Musio” is an artificial intelligence social robot equipped with a cutting-edge artificial intelligence engine, ‘Muse”, fully developed by AKA. Muse recognizes the context of a conversation and the situation by using its deep-learning algorithm and remembers the conversation with the user, illustrating its natural communication feature. The most unique feature about Musio is that it has its own emotional system to show various emotions, such as degree of tiredness through expressions and conversations.

Since its partnership with Softbank C&S in Japan, Musio has already made meaningful progress inside the Japanese market. In 2017, Musio was positioned as No. 1 in social robot sales in Japan's electronics stores' sales, and it led the Ministry of Education in the province and city of Toda, Kashiwazaki, and Yokohama to adopt Musio in classrooms. The fact that more than 104 schools and institutions, from kindergartens to universities, including the leading private educational schools such as Doshisha and Keio schools, use Musio in English classes show clear distinction from other company’s robots, including recent "failed social robots" in the U.S.

Jeju Island has been already well-known for its reputation as a promoter of open educational curriculum and international educational environment, both domestically and internationally. Based on this educational atmosphere, Mureung Innovation Elementary and Middle School decided to introduce Musio for the first time in Korea for English and artificial intelligence education for students. What stands out about this adoption is that the principal visited the AKA office in Seoul in person directly and, thus, proposed the introduction of Musio in Korea. According to Principal Kim, the decision of the principal was made based on the practical devotion to develop and nourish alumni groups from elementary and junior high schools in Mureung-ri. One Musio will be assigned to one student and focus on English classes during the first semester, providing pronunciation checks, English expressions study, textbook English conversation practices, and plans to expand to AI education in the second semester. Above all, the school has great expectations to bring out students' interest and motivation in learning English and introduce effective learning experiences based on AI analysis and adoption.

As the pandemic situation due to COVID-19 becomes severe globally, schools have closed down and delayed the start of the new semester. Amid this crisis, there are many concerns about the importance of home learning and non-face-to-face education and the increase in the cost of it. AKA’s English learning AI solution, based on the Musio robot and Muse engine, overcomes the limitations of lack of interest and motivation, which are the weaknesses of face-to-face education, while also lowering economic burden. AKA is already providing its AI-based communication engine, Muse, to English education companies in Korea and Japan and abroad, including the Pepper flagship robot from Softbank Robotics China, and is also in close discussions about supplying technology and robots to various countries’ Ministry of Education, including the Malaysian Ministry of Education. Raymond Jung, CEO of AKA, aims to supplement human English teachers, previously thought as an irreplaceable job, with the technology of “artificial intelligence that illuminates our time (i.e., 'Episteme.'” Raymond intends to ultimately change and liberate people from the traditional environment and limitations through technology.

With AKA's Customized Functions, Pepper Can Work as an English Teaching Assistant in Classes
AKA LLC - Jul 14, 2020