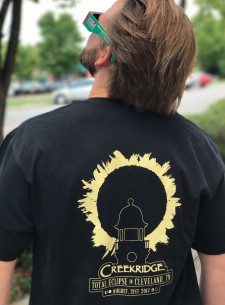 While the glasses are nearly impossible to find nationwide, Check Into Cash donated 43,000 pairs of them to four Tennessee school systems and two Georgia systems.

Check Into Cash has 936 locations in the United States and United Kingdom.

Jones will also attend an “Eclipse Viewing Party” at an estate in Cleveland called Creekridge on Monday.

The glasses are personalized with the date and a unique message for the school systems so that students would have a special historical keepsake that they could keep in their favorite drawer.

“There are people traveling to the United States from all over the world to see the only total eclipse of the sun in the last 26 years – it’s a major event that people will talk about for generations and no one is more excited than kids,” said Bailey. “We wanted students to be able to have fun watching the eclipse without risking eye damage and that is why we considered only glasses that were NASA-approved.”

The Tennessee school systems that received the glasses were Bradley County, Cleveland, Dayton, and Rhea County. Whitfield County and Dalton were the two Georgia systems.

Along with Cleveland and Bradley County, Rhea students are in the Path of Totality. Students in Whitfield County and Dalton will need to travel 45 minutes away to Blue Ridge, Georgia to place themselves in the path.

“We want our local students to realize that some people are driving or flying thousands of miles just to get themselves into The Path,” Bailey said. “And here it is, coming right to your neighborhood or very close to your neighborhood. Don’t miss it, because if you do you will have to wait seven years for another one in 2024!”