2ndPassports.com is preparing for a surge in interest in their assistance program for second citizenship to the Caribbean island nation of St Lucia in wake of the recent exciting announcement by Caribbean construction giants Range Developments. 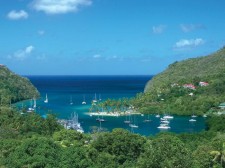 Bern, Switzerland, August 18, 2016 (Newswire.com) - The announcement states that the government of St Lucia has granted Range Developments permission to begin their proposed resort at Black Bay in Saint Lucia, which will consist of a 5-star yet-to-be branded hotel, a complex of luxurious apartments and villas, a marina and an equestrian center. This project will be constructed on 180 acres of unused land on the southern tip of St Lucia.

Here is the official statement from the St Lucia government:

Mohammed Asaria, Vice Chairman of Range Developments put out this statement in reply:

“This will be our third major luxury development in the Caribbean and we are delighted to be working with the Government of Saint Lucia. Discussions with a potential operator is underway and an announcement will be forthcoming. The project will create about 500 jobs on the island during construction, with a similar amount once the hotel is operational.”

Range Developments are in the process of wrapping up their most recent project – the 5-star Park Hyatt resort in St Kitts, and are about to embark on developing another luxury enterprise - the Cabrits Resort Kempinski in Dominica.

Banking In The Caribbean

The Caribbean has long been famous for being a touristic paradise, and with its golden beaches, coral seas and rainforests is a playground for both the rich holiday maker and the eco-adventurer.

However, it’s not just its cosmetic qualities that the Caribbean is now famous for; since the mid-1970s, the islands have also been known as an off-shore tax haven, and are home to a multitude of banks which safeguard the assets of many of the most powerful corporations (and nations) in the world to a tune of an estimated $20 trillion!

But it’s not just multi-nationals that benefit from banks in the Caribbean. Thousands of wealthy business people from Europe, North America, the Middle East, Africa and Asia who find that their own country’s taxation is stifling their growth, rely on the discretion and creativity of countries like St Lucia to survive and prosper.

What Is Citizenship By Investment?

St Lucia is one of several Caribbean nations who offer Citizenship by Investment (CBI), the means of gaining a second passport and citizenship to a country in return for making an investment into that country’s infrastructure, either by the purchase of real estate or by a charitable donation to an ex-worker’s care fund.

CBI actually began in the Caribbean and St Lucia’s neighbor St Kitts and Nevis were the first country in the world to develop such a program back in 1984. Other Caribbean countries would soon follow suit, and the practice would spread to other parts of the world with varying degrees of success.

Currently CBI is enjoying a boom, with many EU countries like Austria, Belgium, Portugal and Greece introducing their own Citizenship by Investment programs to great success. Whereas individuals tend to acquire Caribbean citizenship for banking purposes, the EU passport is much sort after by those who require greater freedom of movement and the ability to live and work throughout Western Europe.

Acquiring citizenship to St Lucia by virtue of investing in the fabulous Black Bay resort makes sound business, economic and recreational sense. Ownership of any piece of property on the resort – from a studio apartment to a luxury villa – will be a sound investment that will only grow in value in the coming years, and in the meantime can be used for holiday lets to generate an additional source of income.

Plus, let’s face it - there are a lot worse places to visit than St Lucia, and you may find yourself using your investment much more than you thought, both for family vacations or just weekend breaks. St Lucia is a beautiful island that still retains a timeless, unspoiled feel, and is the perfect location to recharge one’s batteries.

Then of course, there are the obvious benefits of Caribbean citizenship for banking and tax shelters. You will be able to take full advantage of a level of banking discretion and creativity that has long since disappeared in most parts of the world, and all the while being subject to minimal taxation.

St Lucian citizenship grants the owner automatic membership of CARICOM – the Caribbean equivalent of the EU. In essence, this means you are free to live, work and bank in any of the 20 CARICOM Member and Associate States including Antigua and Barbuda, the Bahamas, Barbados, the Cayman Islands, Jamaica, Saint Kitts and Nevis, Trinidad and Tobago and the Turks and Caicos Islands.

For more information on Citizenship by Investment programs in the Caribbean as well as Europe, be sure to check out 2ndPassports.com. There you will find all of the very best CBI programs, what they offer you, and what those nations require in return.

You can contact 2ndPassports.com by email, WhatsApp or telegram, or chat to an expert representative via telephone or Skype. Our lines are fully encrypted, and all conversations and correspondence is dealt with in the strictest confidence.

2ndPassports.com Introduces Its World Citizenship/Residency Program Index
It has never been easier for wealthy individuals from areas like Africa, Asia and the Middle East to gain life-changing second citizenship or residency to a Western country.
2ndpassports - Jul 27, 2017