Special effects add impact to events, corporate theater and meetings, and create high energy at large gatherings. A new generation of sparkle fountain effects are as visually thrilling as stage pyro, but are safer and cool to the touch.

LOS ANGELES, November 10, 2017 (Newswire.com) - Big events have to work harder to create excitement for everyone, especially for people in the back rows. The solution is to add energy with live special effects like pyrotechnics, laser beams, or new technology special effects that surprise everyone.

A recent conference in Salt Lake City for USANA became a showcase for the entertainment team at TLC Creative Special Effects. The challenge was how to spread the energy across a very large stage. TLC and the Usana team surveyed the monumental 550- foot video animation wall, the mission was to create a set of live effects that would produce exciting moments against the mammoth wall. Reaching into his bag of tricks, he pulled out the latest effect in the arsenal; white sparkle fountains.

White sparkle fountains produce a non-pyro effect that is safer than pyro, with an effect that shoots brilliant sparks 18 feet into the air of an indoor event. The small units are DMX controlled and can be placed in any position that the director desires.

At Usana, a dozen White Sparkle Fountains units in all were placed 15 feet apart and multiple settings were programmed into the DMX board so that they would complement the videos playing in the background. Not satisfied with just one effect, TLC Creative then placed fog blasters covering the width of the stage.

The fog blasters shoot bursts of high-density fog into the air with the flip of a trigger. When it came time to show off the effects, TLC carefully timed both effects and wowed the audience with a battery of engaging special effects. The focus remained on the main video but was highlighted by these unique and exciting effects, a balance that TLC strives to achieve when asked to participate in the special effects arena.

Xylobands are creating group experiences with synchronized lighting effects and creating motivational energy for corporate theater, as well as public and private events of all sizes. The Usana event featured Xylobands as a way to connect everyone to the event and to each other.

TLC Creative will be showcased at TWO expos in Las Vegas:

Contact TLC Creative for more information on Xylobands and for live special effects. 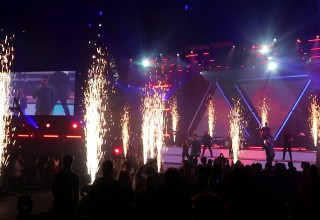 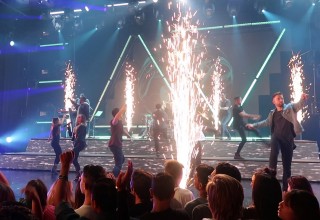 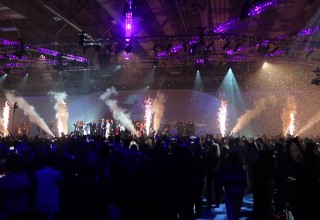 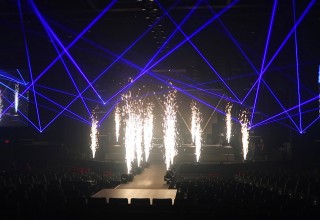