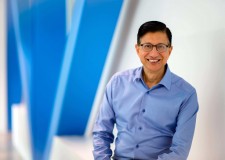 LOS ANGELES, July 17, 2020 (Newswire.com) - ​The Akshaya Patra Foundation USA has announced important changes to its Board of Directors. Dr. Gururaj "Desh" Deshpande, President and Chairman of Sparta Group LLC, has stepped down as Chairman. The organization is proud to announce the new incoming Chairman, Dr. Siva Sivaram, President of Western Digital, with Srivatsan Rajan, Partner at Bain & Company, serving as Vice Chairman.

Inspired by the organization's mission to ensure no child is deprived of education because of hunger, Dr. Desh Deshpande started the Akshaya Patra Foundation USA from his home office in Boston in 2006. "I will continue to serve on the board and look forward to working with all of the supporters under the leadership of Vandana, Siva, and Sri to make sure we create opportunities for many, many more children in India," stated Dr. Deshpande. He has founded several successful companies including Cascade Communications and Sycamore Networks and serves as a life member of the MIT Corporation.

Dr. Siva Sivaram, President of Western Digital, was appointed Executive Vice President of Memory Technology in 2016 when SanDisk was acquired by Western Digital and is responsible for the ongoing development of next-generation technologies. He has held executive positions at Intel and Matrix Semiconductor and at SanDisk after its acquisition of Matrix.

Siva has been an Akshaya Patra supporter for the past six years. "Desh is leaving behind a very strong board and a strong team," stated Dr. Sivaram as he looks forward to being a part of the noble endeavor.

Srivatsan (Sri) Rajan, a Partner at Bain & Company in San Francisco, has been a supporter of the organization for over five years. "It is my endeavor to make sure that no child in India goes hungry. There is a lot of work to be done to get there and we cannot rest until we get to that point." Rajan has served as the Chairman and Managing Director of Bain's India offices and has over 20 years of management consulting experience in India and the United States.

Established in 2000, Akshaya Patra is the largest NGO-run school meal program in the world, according to Time Magazine, and serves 1.8 million children daily in over 19,257 schools through 55 kitchens in 12 states and two Union Territories in India. It costs only $20 to feed a child for an entire school year.

The Akshaya Patra Foundation USA (AP USA) was formed in 2006 as a 501(c)(3) nonprofit organization and has an enviable four-star rating on Charity Navigator. The foundation is headquartered in Los Angeles, California, and supports the Akshaya Patra mission by raising funds and awareness in the United States. For more information: www.foodforeducation.org.