Holotwins and Portals Connect Donors More Deeply with the Mission 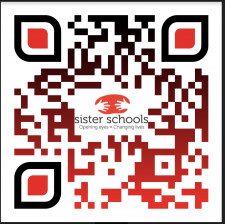 BELOIT, Wis., February 15, 2022 (Newswire.com) - RealityBLU's WorldViewAR platform is being used by Sister Schools, a nonprofit in the Pacific Northwest, to boost its donations and benefit school children in Uganda. The campaign is being produced by image8creations, AR artists in Salt Lake City, Utah.

While an increasing number of nonprofits are using augmented reality (AR) to increase awareness of their missions, Sister Schools is breaking ground by using it for direct fundraising. New AR approaches, such as those being powered by RealityBLU's WorldViewAR platform, are making this possible, and they are proving to be highly effective.

Working with image8creations, Sister Schools launched the Track the Container program, which uses the power of "holographic twins" (or holotwins) and AR portals to deepen donor engagement by allowing them to participate in the mission in a more interactive way.

To create the holotwin, image8creations took a video of Sister Schools founder Terry McGill against a green screen. Using WorldViewAR's simple online wizard, the video was turned into an AR scene within minutes. The resulting QR Code and hyperlink were added to the school's direct mail, email, and social media channels, as well as its website.

WorldViewAR experiences are web-based, so no app is required. Donors simply scan a QR Code and place the holotwin, called "Tabletop Terry," in their real-world environments, where they can experience McGill sharing the importance of the mission right in front of them.

For a $10 donation, people receive a second AR experience, a magnet with a QR Code that leads to an AR portal that, thanks to the power of 360º video, lets donors walk into each transportation hub as the school supplies pass through it. Donors can see their gifts at work as they "track the container" all the way to its destination.

The program is fresh into the field and already resulting in a higher level of engagement and donations than 2021.

RealityBLU's web-based platform enables non-technical marketers and designers to create and publish augmented reality (AR) scenes that put People, Places, and Things into the Metaverse. RealityBLU eliminates the technical barriers to implementing and measuring AR scenes by providing marketers with an intuitive interface and workflow that allow them to attract and delight more customers. RealityBLU has acquired 1,000+ users and attracted household name brands across many vertical markets.