Simona Grace, California Mother of the Year and Founder of Moms in Office Announces Support for California Attorney General 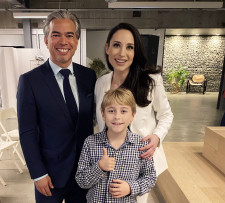 LOS ANGELES, January 23, 2021 (Newswire.com) - Today, Simona Grace, founder of Moms in Office political action committee, announced her strong support and endorsement of Assemblymember Rob Bonta for California Attorney General. Current Attorney General Xavier Becerra was nominated by President Joe Biden to serve as Secretary of Health and Human Services. Bonta, 48, has served in the California State Assembly since 2012 and represents Oakland, Alameda, and San Leandro. He was California's first Filipino state legislator, and would be the first Filipino to serve as Attorney General of California.

Grace, 38, called on Governor Newsom to appoint Bonta as California's next Attorney General, adding her name to the list of endorsements by prominent activists and lawmakers such as Alicia Garza , California Treasurer Fiona Ma, and actress Diane Guerrero.

"We need a strong advocate for justice and equality as California's next Attorney General, especially under the current circumstances," said Grace. "Women have been bearing the brunt of the burden during this pandemic and working mothers have suffered job losses at an unprecedented level. Women's rights are under assault in our country and the next Attorney General of California must be committed to protecting the rights of women and the rights of those most vulnerable."

Assemblymember Bonta introduced AB 220 last year, the legislation allows candidates the use of campaign funds for childcare. AB 220 helps more women and working people with caregiving responsibilities to seek elected office. "California is one of the most progressive states in our country, yet we are far from gender parity in our local and state government," said Grace. "AB 220 removes an important barrier that prevents so many women from becoming the legislators we need today. Assemblymember Bonta has been a champion in our fight to achieve gender parity in our government."

Simona Grace is a single mom, an outspoken advocate for women's political empowerment and the founder of Moms in Office. A speaker and frequent commentator on women's rights and progressive issues, her writing and work have been featured in The New York Times, Supermajority and USA Today. Moms in Office has proven immensely successful during the last election cycle, helping to elect superstar candidates like, Rep. Katie Porter and Congresswoman Nikema Williams.