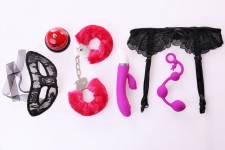 MIAMI, February 5, 2020 (Newswire.com) - A study conducted by Ella Paradis, leading online retailer of sexual health & wellness products, revealed 86.2% of people believe toys improve their sex life, and 83.1% of people intend to use sex toys this Valentine’s Day. 1,160 customers participated in the study seeking answers as to why people are using toys and what type of toys they are using.

“When I started Ella Paradis, my goal was to improve the sex lives of those around me. I heard stories of women with certain health conditions making it extraordinarily difficult to reach climax. I’ve met men with performance issues due to diabetes or low testosterone. The trans community has told me toys help make it possible to connect with their partner,” remarked Tino Dietrich, CEO of Ella Paradis. “But to see the data proving toys have improved sex lives, I know my mission has only just begun.”

Toys, and specifically vibrators, have become increasingly popular with old stigmas surrounding sex and toys being lifted in recent years. The data from Ella Paradis’ survey also proves that society is open to the thought of toys and embracing their various benefits. To learn more about these toys and to find something for yourself, or your partner this Valentine’s Day, head to the Ella Paradis website!

Ella Paradis Reveals Women Aren't the Only Ones Who Use Vibrators
Ella Paradis - Jan 22, 2020
Newswire