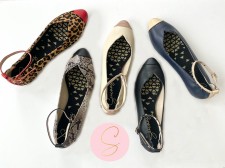 RICHMOND, Va., February 19, 2020 (Newswire.com) - Seecaas, a women’s luxury footwear brand, announced its official launch in the U.S. today. Ashley Hensley, founder of Seecaas, named the company after the Seecaas Hope for Adoption Foundation, which provides monetary support for families facing financial barriers on the path to adopting a child. Two percent of every purchase from Seecaas is donated to the foundation.

The Ella Flats collection, named after Hensley’s daughter, comes in a number of different styles including leopard, snake-skin, and glitter options. Each style features a classic almond-shaped cap-toe and are all crafted out of 100 percent real leather. The flats also include removable ankle straps for added support.

The removable insoles of each shoe are knit with recycled plastic thread and feature metallic gold triangles as a nod to the adoption triad. The triad triangle represents the relationship between birth parents, adoptive parents, and the adoptee. This symbol can also be found on the company’s Hope bracelets, aptly named after the Foundation. The bracelets come in black, navy, and tan adjustable waxed nylon.

“I wanted to create a stylish but comfortable shoe for busy women like myself,” said Hensley. “I also wanted to pay tribute to the importance of adoption because it is a topic very near and dear to my heart, having two adopted children myself.”

“To me, sparkle means to inspire,” said Hensley. “I want the women who wear these shoes to be feel inspired and in result, I want them to leave every room having inspired someone else!”

Seecaas shoes are already a favorite of many celebrities and influencers including Real Housewives of Dallas stars Brandi Redmond and Stephanie Hollman. They have also been spotted on actresses Tori Spelling, Kristin Davis, and Melissa Gilbert.

Seecaas provides luxury shoes created for the busy woman who leaves a little sparkle everywhere she goes. A portion of each sale is donated to the Seecaas Hope for Adoption Foundation. Additional information about Seecaas can be found at seecaas.com

About Seecaas Hope for Adoption Foundation:

POSH PR® is a boutique PR and luxury branding agency specializing in partnerships with fashion, beauty and lifestyle brands worldwide.

New Community-Based Beauty App, Fair Pick, Now in the iPhone App Store
Fair Pick was born from frustration and annoyance of no product working, nothing being quite right and no one having an answer
POSH PR® - Jan 30, 2019
Newswire