Iconic Chapel In Need Of Immediate Restoration and Preservation 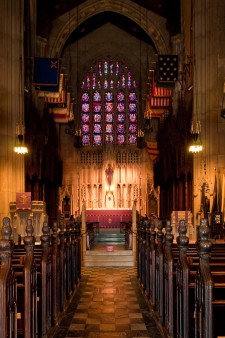 Philadelphia, PA, October 13, 2016 (Newswire.com) - ​​​​The Washington Memorial Chapel in Valley Forge Park has a meaningful place in the hearts of many. It is a place of worship and community for a thriving congregation of the Episcopal Diocese of Pennsylvania. At the same time it is a living memorial to George Washington and the Patriots of the American Revolution. And for some, it’s simply a place of solace.

Now this sacred Chapel is in need of immediate restoration and preservation.

"Losing this treasure would be like closing the Smithsonian and the Washington Monument simultaneously. As you know, the Washington Memorial is closed because of deferred maintenance."

In response to these great needs, the leaders of The Washington Memorial Chapel have launched a campaign to raise funds to restore the building to its original glory. After a thorough architectural assessment in 2015, it was determined that the cost of repairs will total nearly $4.5 million. Under the leadership of the Campaign’s Chairman Jason Griggs, the campaign has already raised $500,000 in an initial quiet phase among close friends of the Chapel and the Washington Memorial Heritage.

The public phase was kicked off during an event that was held on June 12 at the Chapel. This phase expands the campaign’s efforts to include the entire congregation and a wider circle of friends and supporters. The goal of this phase is to raise the first $1 million to address the emergency and highest priority repairs to the Chapel.

“The Washington Memorial Chapel is a special place.  What most people don’t know is that the Chapel is NOT a part of the Valley Forge National Park despite being surrounded by it and therefore does not receive any financial assistance for preservation,” said Griggs. “Losing this treasure would be like closing the Smithsonian and the Washington Monument simultaneously. As you know, the Washington Memorial is closed because of deferred maintenance.”

The campaign will ultimately transition to a wider campaign that will aim to raise the remaining funds and accomplish preservation efforts for the Chapel. This longer-term strategy will include approaching foundations that have a passion for preserving historic buildings, especially ones that are related to the history of our nation and its founding leaders.

“The campaign will grow to encompass local, national, and international supporters, taking into account the close ties between the United States and France during the American Revolution and the Chapel’s continuing memory of France’s support,” added Griggs.

For more information about The Washington Memorial Chapel, visit http://wmchapel.org/heritage/ and http://www.savewashingtonmemorial.org/ to learn about the campaign.

About The Washington Memorial Chapel

The Washington Memorial Chapel was built as a tribute to General George Washington and the Continental soldiers who survived the brutal winter cantonment at Valley Forge in 1778-1779. The inspiration for the Chapel resulted from a sermon preached by the founder and first rector, the Rev. Dr. W. Herbert Burk, of Norristown, Pennsylvania. In June 1903 the cornerstone was laid on private property donated by the I. Heston Todd family. A small framed building preceded the present structure which became known as the Theodore Roosevelt Chapel, in honor of President Roosevelt, who visited the site in 1904. The Chapel was completed in 1917.  It is the home of an active parish in the Episcopal Diocese of Pennsylvania.

Designed by Milton B. Medary, Jr., the Chapel was erected for two purposes. It is the home of an active parish as well as a national memorial to Washington and the Continental Army, welcoming visitors from all over the world and serving as a “wayside chapel” for those who visit Valley Forge National Historical Park.

Both the Chapel and the Washington Memorial Heritage are private organizations. Visitors are often surprised to learn that the Chapel receives no funding from the National Park Service and is not formally affiliated with the Valley Forge National Historical Park.

Washington Memorial Heritage was created as a secular nonprofit, independent of the Chapel. It is a qualifying charity under Section 501(c)(3) of the federal tax code. This allows foundations and individuals who might not contribute to a purely religious organization to aid in the preservation of this magnificent building, which has been described as one of the foremost examples of Gothic Revival architecture in the United States.

dmk Publicity is a full service public relations and communications firm that believes in catering each strategic campaign to meet you or your company's direct needs.