With help from MagicalXmasLetters.com and loving parents, jolly old man to send customized notes to well-behaved kids in the US. 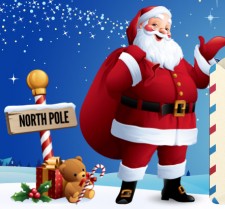 Sarasota, FL, November 1, 2016 (Newswire.com) - Santa Claus announced today that, with the help of parents, he plans to write personalized letters and send Christmas packages from the North Pole to all good boys and girls in the United States. This year, Santa has decided to incorporate special gifts including a map from the North Pole to each child’s house, a copy of the Nice List with the child’s name on it, a personalized Nice List certificate, a pinch of reindeer food and a personalized letter from the jolly old man himself.

“My husband has been busy all year long planning for the big day, since we have more children on the Nice List this year than ever before. He just has the biggest heart, and he wanted to do something extra special for the kids this Christmas season,” said Mrs. Claus. “While Santa absolutely loves visiting the children’s homes with the reindeer on Christmas Eve, he was just tickled by the idea of being able to write them sweet letters ahead of time too.”

From his workshop at the North Pole, Santa has been stationed at his desk, enjoying milk and freshly baked cookies while routinely checking his website and scrawling away to make sure he sends out the letters to all the good boys and girls before Christmastime.

Custom Package From the North Pole Arrives for Sarasota 6-Year-Old
The first-grader received a box from Santa Claus himself, with help from Holiday Printables
Holiday Printables inc - Dec 8, 2016