The first-grader received a box from Santa Claus himself, with help from Holiday Printables 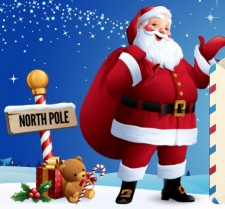 Sarasota, FL, December 8, 2016 (Newswire.com) - Sandy Tinsel, a bright Sarasota first-grader, received the surprise of a lifetime when she opened a package delivered to her doorstep last week. The 6-year-old opened a box from the North Pole containing a map from Santa’s Workshop to Sandy’s house, a copy of the Nice List with the her name on it, a personalized Nice List certificate, a pinch of reindeer food and a personalized letter from Santa Claus himself.

This year, Santa is writing these personalized letters and sending Christmas packages from the North Pole to all good boys and girls in the United States with the help of their parents. Sandy, a student at Riverside Elementary, was among the first to receive a package from St. Nick, and her father says she’s been showing all her friends and neighbors.

“It’s really heartwarming to see her reaction. We knew she would be excited to get her package from Santa, but we couldn’t have imagined the level of joy in her heart,” said Joseph Tinsel, Sandy’s father. “A few days later, her best friend received a package from Santa too, and the two of them cannot stop talking about it!”

This time of the year, Santa’s elves are working hard to finish building this year’s toys in the workshop. The jolly old man himself has been spending his days stationed at his desk, drinking milk and munching on warm, fresh cookies while routinely checking his website and scrawling away to make sure he sends out the letters to all the good boys and girls before December 25th rolls around.

Nice List Children to Receive Personalized Surprise From Santa
Kris Kringle to send customized notes to well-behaved children in the US, with help from parents and Holiday Printables Inc.
Holiday Printables inc - Nov 16, 2016

Santa Claus to Write Personalized Letters for Children on the Nice List
With help from MagicalXmasLetters.com and loving parents, jolly old man to send customized notes to well-behaved kids in the US.
Holiday Printables inc - Nov 1, 2016
Newswire